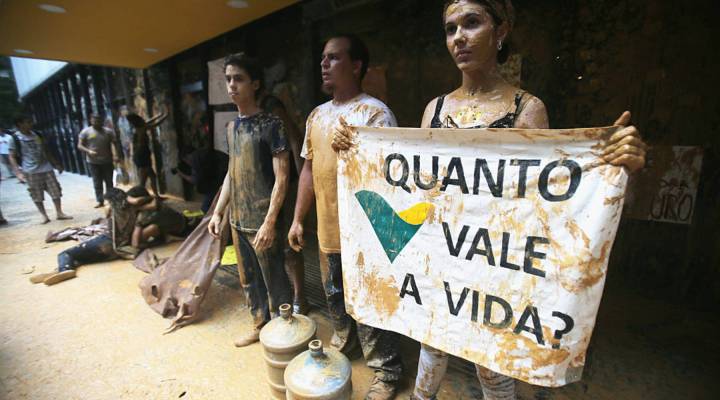 COPY
Protestors stand amidst muddy water which they spashed at the entrance to Vale headquarters. The sign reads "How much does a life cost?' Mario Tama/Getty Images

Protestors stand amidst muddy water which they spashed at the entrance to Vale headquarters. The sign reads "How much does a life cost?' Mario Tama/Getty Images
Listen Now

A Brazilian mine run by Samarco, a joint venture between BHP Billiton and Vale, suffered the collapse of two dams. As a result, the company was hit with fines of more than $90 million and its CEO was recently charged with homicide because of the disaster.

Environmental groups have said the long-term damage from the disaster would take $27 billion to fix. After initially asking for $5 billion from the companies, Brazilian prosecutors later asked for $10 billion, because it’s tough to figure out the costs of disaster.

When an environmental disaster happens in the United States, the government and a bunch of lawyers are tasked with determining who’s to blame and what they should pay. Wade Martin, professor and chair of the Economics department at California State University, Long Beach, said it’s not an easy task.

In the U.S, the process is called Natural Resources Damage Assessment. It was established after the Exxon Valdez oil spill in 1989. The regulation isn’t established rules, more like guidelines.

“You can’t really go to Wal-Mart and buy a sea bird,” he said.

William K. Reilly, co-chair of President Obama’s commission on the BP oil spill in the Gulf, called the process more art than science. He said some of the numbers also depend on the culprits.

“You look at how big they are,” he said, “and what kind of signal it will send.”

Companies are taking note of the signals prosecutors are sending. To minimize potential liabilities, many try to work with communities beforehand to explain the risks of what they’re doing. Wade Martin said that process is more difficult today because mining science is advancing so quickly.

A community may face relocation or even obliteration. A company faces the shutdown of one location and, of course, potential litigation.