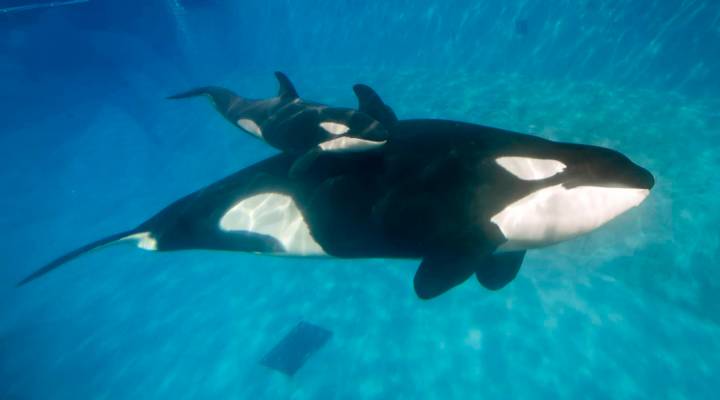 COPY
People are rushing their children to SeaWorld to see the orca show before it ends next year. Mike Aguilera/SeaWorld San Diego via Getty Images

People are rushing their children to SeaWorld to see the orca show before it ends next year. Mike Aguilera/SeaWorld San Diego via Getty Images
Listen Now

SeaWorld has battled with animal rights activists for decades. But when the film “Blackfish” came out a few years ago, the criticisms became a lot more widespread, and legal battles forced the company to change its shows. In fact, SeaWorld is getting rid of killer whale performances next year. And lots of people are rushing their kids to the park in San Diego before that happens.

On a cloudy Monday evening at 5 p.m. there were still hundreds, if not thousands, of cars in the Sea World Parking lot. And as people leave the grounds, most said they came here for one thing.

“We came specifically because we knew they were going to end the theatrical show,” said Steve Sands, who brought his 8-, 9- and and 10-year-old kids from Orange, California, to spend a day at the park. “I grew up with the killer whales and we knew that they’re changing that and so we wanted to come and have them see the theatrical show before it went away.”

SeaWorld has been on a public relations full-court press lately and said it’s been listening to the way people feel about the orca shows, and that’s the reason behind the change.

Aimee Faucett, COO of the San Diego Regional Chamber of Commerce, where SeaWorld has a seat on the board, said SeaWorld contributes a lot of money and jobs to the San Diego economy.

“SeaWorld’s about rescuing, educating and making sure and protecting sea life and animals,” she said. “San Diego Zoo and the zoos are similar, and we need to start looking at the educational component of SeaWorld and zoos and other parks like this that children and adults can have an opportunity to learn about things.”

That’s fair, but SeaWorld, throughout its history, has been defined by Shamu and the performances. At least one 8-year-old who was leaving the park, Amelia Abram, wasn’t happy about the decision to get rid of the whale shows.

“They’re saying they’re stopping Shamus for conservation, but they’re not going to release the whales though, they’re just not going to do tricks,” she said. “I mean, if they’re going to have to be in captivity, you should have them do stuff that’s at least fun.”

One could argue that SeaWorld without Shamu is like Starbucks without Frappuccinos (or Marketplace without the numbers). It sounds like the SeaWorld of the future is going to be a lot more like a zoo than a theme park, which, after all, was the park’s original mission. Amelia’s only 8, but seems to have a decent understanding of what’s at stake for SeaWorld.

“They’re gonna lose half the crowd when they do that, I think,” she said. “So, it’s bad not only for the whales because they won’t get to splash anymore and do fun tricks, but it’s bad for their business too.”

It’s unclear whether the whales are actually going to be bummed about not getting to do tricks, anymore. But the point about their business seems pretty logical, Amelia.