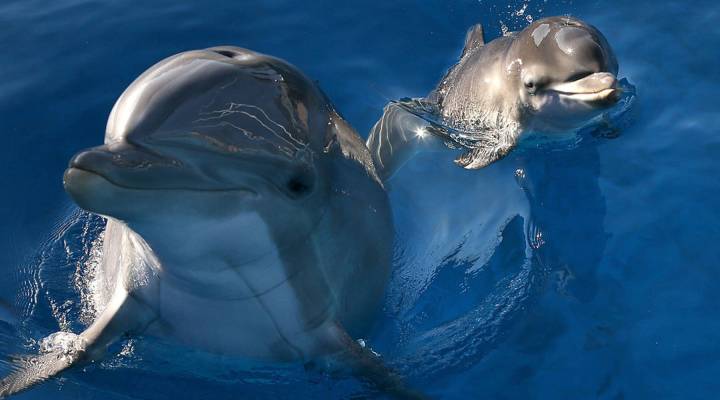 Bella, a bottlenose dolphin, swims in a pool with her new calf named Mirabella at Six Flags Discovery Kingdom in Vallejo, California in 2014. Justin Sullivan/Getty Images

Bella, a bottlenose dolphin, swims in a pool with her new calf named Mirabella at Six Flags Discovery Kingdom in Vallejo, California in 2014. Justin Sullivan/Getty Images

While this marks a victory for animal rights activists who have long questioned the amusement park’s captivity practices, it also speaks to the bigger issue of keeping animals captive for entertainment.

“These decisions — and the debates that preceded them — are about more than these orcas,” SeaWorld CEO Joel Manby wrote in an op-ed in the Los Angeles Times. “Bigger questions are at stake than whether any animals anywhere should remain under human care.”

Presumably, this also applies to one of SeaWorld’s other star attractions — dolphins. The amusement park has several programs centered on interacting with dolphins, including one where you can get in the water with the iconic marine mammal. These types of “swim with dolphins” activities, made popular by resorts and cruise ships, are facing growing criticism from activists and concern from authorities in places like Florida and Hawaii.

SeaWorld didn’t respond to a request for comment, but Manby’s op-ed indicates the dolphin activities will go on. The company plans to increase its focus on rescue operations, which includes taking care of  “thousands of stranded marine mammals like dolphins and sea lions that cannot be released back to the wild will have a place to go,” he wrote. It’s not clear how many of SeaWorld’s dolphins come from a breeding program, but the company’s San Diego park had its 81st dolphin born into captivity last year.

Manby made a plea that SeaWorld is on the side of all animals.

“In this impending crisis, the real enemies of wildlife are poaching, pollution, unsustainable human development and man-made disasters such as oil spills — not zoos and aquariums,” he wrote.

This news comes as the National Oceanic and Atmospheric Administration is considering a ban on swimming with dolphins in Hawaii due to concerns from scientists that these kinds of activities harm the animals, who are nocturnal  and need to rest after foraging for food all night, according to the Associated Press. The agency has actually considered regulating the activity for more than a decade because of its popularity, but instead opted to do more research and promote guidelines to discourage it.

SeaWorld’s orca announcement is not surprising, given that the California Coastal Commission decided in October the company would no longer be allowed to breed animals in captivity, according to the Washington Post.

“SeaWorld hasn’t collected an orca from the wild in almost four decades,” Manby wrote, making the current family of killer whales, the “last generation of orcas in SeaWorld’s care.”

The public outcry over the entire practice of captive orcas was sparked by the 2013 documentary “Blackfish,” which focused on the living conditions of captive killer whales and the dangers their handlers faced. The film targeted SeaWorld and other captivity programs. Following the documentary’s rise in popularity, SeaWorld announced last year that it would phase out its iconic killer whale shows at its park in San Diego. 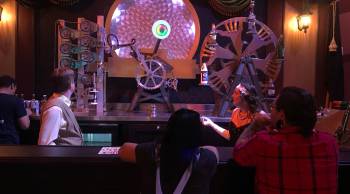