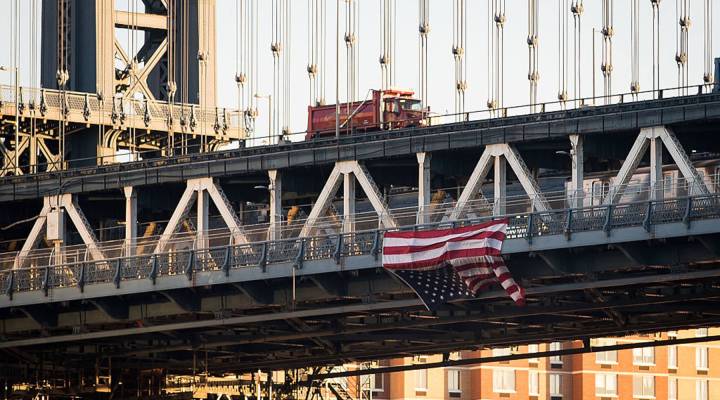 COPY
Hung by anti-Donald Trump protestors, an upside down American flag hangs from the side of the Manhattan Bridge on November 14, 2016 in New York City.  Drew Angerer/Getty Images
Politics Inside Out

Hung by anti-Donald Trump protestors, an upside down American flag hangs from the side of the Manhattan Bridge on November 14, 2016 in New York City.  Drew Angerer/Getty Images
Listen Now

First of all, oh my gosh. If Wednesday was a shocker for the entire Washington politician universe, having Reince Preibus move in as the Chief of Staff, it’s a big shock. The man has been on the outs of the Republican party for years now. This is the guy who shepherded out the establishment fundraising platform, even post-Citizens United. This is the guy who more or less scared away every donor. Maybe he was a harbinger of a Donald Trump presidency, because the Republican party has eaten itself alive for a lot of years and was thought to be eating itself alive in this election, until Donald Trump pulled out Wisconsin and Michigan, and now it’s Reince Preibus in the White House?  I think I’ve said this three times in this podcast, we woke up in Mars.

One of the first agenda items discussed for Donald Trump’s presidency has been a trillion-dollar bill for infrastructure. Seabrook is unsure if such a bill would have Speaker Paul Ryan’s blessing:

It’s going to be incredibly difficult. At the same time that Donald Trump and lots of other people are talking about immense spending deals — I remember the gasp in the room when George Bush said $87 billion in investment — you talk about a trillion? I mean again, Mars. We should call this podcast, “Politics on Mars.” At the same time that they’re saying they want to do this, they’re also saying they’re going to cut down income tax brackets down to three, topping off at 33 percent, which is a lot lower than it is now. They’re talking about cutting corporate tax rates. They’re talking about all of these ideas to spend money, but to drain the Treasury at the same time through tax changes. That is not going to fly with people like Paul Ryan.

Got questions about the election aftermath, Trump’s first 100 days or the future of the American economy over the next four years? Tweet them to @Marketplace, @kairyssdal or @RadioBabe.

Politics Inside Out
Tags in this Story
Share this Story