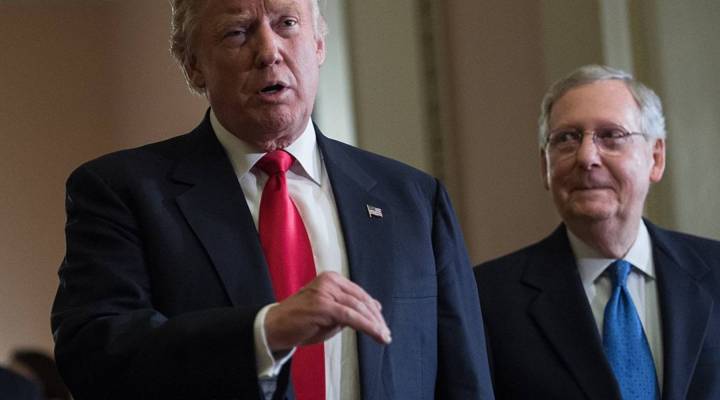 President-elect Donald Trump’s 100-Day action plan includes one of his campaign promises: to renegotiate or withdraw from the North American Free Trade Agreement. Canadian Prime Minister Justin Trudeau said this week he’s “more than happy to talk.” Mexico seems less thrilled. But there is a gears of government question to be asked here. How, exactly, would renegotiating NAFTA work?

Getting out altogether would be fairly easy, said Andy Shoyer, a partner at the law firm Sidley Austin in Washington, D.C.

“NAFTA provides for withdrawal very clearly in Article 2205,” he said. “You give six months’ notice, and six months later the withdrawal is effective, and then the agreement would remain in force for the other parties.”

“But I don’t think that that’s really what he wants to do,” said Rachel Brewster, who teaches international trade law at Duke University. “It sounds like what he would really like to do is renegotiate it.”

Trade deals, including NAFTA, get informally renegotiated all the time, she said. But if Trump wants to dramatically reshape it, “the parties would just get together, they’d write a new agreement, they’d make that agreement preempt the old agreement and then that agreement would have to pass Congress,” she said.

That is, if the other parties are willing. Trump has threatened to slap a 35 percent tariff on Mexican imports.

“They’re not going to agree to that,” Brewster said.

If Trump decided to move unilaterally, said Jeffrey Schott with the Peterson Institute for International Economics, he could violate other trade rules.

“Many of the actions that were discussed during the election campaign probably would run afoul of U.S. international obligations,” he said.

All three countries are members of the World Trade Organization. If the U.S. was found in violation by the WTO of discriminating against its trading partners, Schott said, those partners could retaliate with tariffs of their own.

In 1993, the U.S. exported more goods than it imported from Mexico and had a trade surplus of $1.3 billion. How has the trade balance moved since?