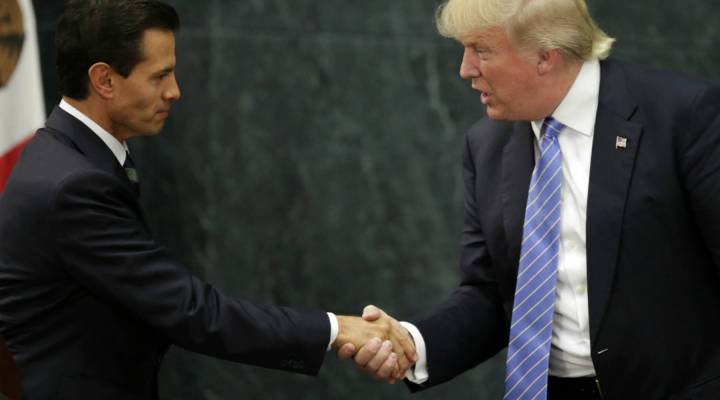 President-elect Donald Trump had criticized NAFTA during his campaign, at one point calling it “one of the worst things that ever happened to the manufacturing industry.”

His 100-day action plan states that he will either renegotiate the deal, or completely withdraw from it.

But how would this actually play out on a practical level and affect those involved in the trade bloc? León Krauze, an anchor for Univision’s KMEX and a contributor to the New Yorker, joined us to talk about what could happen to Mexico’s economy.

On Mexico’s reaction to Trump’s plans:

Some in the Peña Nieto government seem more worried than others. There seems to be less concern when it comes to trade and NAFTA, honestly. Ildefonso Guajardo [Villarreal], who’s Mexico’s secretary of the economy, has repeatedly said that he’s very confident that Trump won’t break up the treaty and insists that renegotiating would be, and I quote, “insane,” so I think most of the Peña Nieto administration is operating — perhaps naively, if you ask me — under a best-case scenario when it comes to Trump and trade.

On the effects of a NAFTA withdrawal:

If NAFTA were to disappear tomorrow, Mexico’s economy would contract in such a dramatic fashion that the country would most likely fall into deep recession. But as you know, the United States would also suffer. I mean, more than 14 million American jobs depend on trade done through NAFTA with Canada and Mexico.