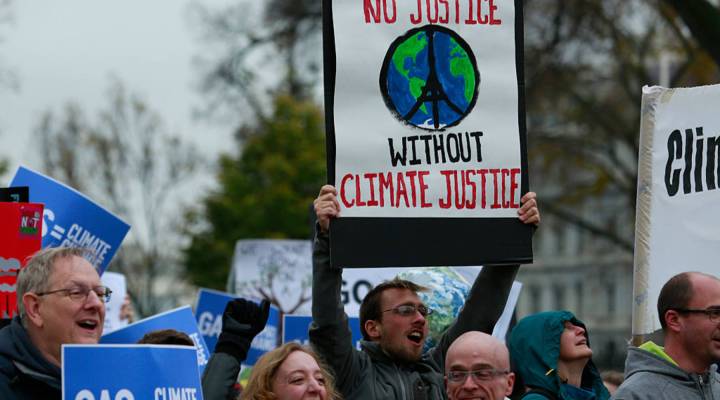 Considering that so much of what Donald Trump plans to do as President remains to be seen, the amount of campaign rhetoric he has devoted to environmental issues is comparatively robust. Trump has said he’d pull the country out of the Paris Climate Agreement to reduce global carbon-dioxide emissions; cut back on the Environmental Protection Agency’s power and revive the coal industry.

Some, like the coal promise, are unlikely to happen, since he also backs natural gas — the affordable production of which is the main reason for coal’s decline. Other promises though, lie within easy reach.

At this moment, world leaders are in Morocco, working out details of how to enforce the Paris Climate Agreement, a global pact formed in 2015 to limit global warming to less than 3.6 degrees Fahrenheit. The voluntary agreement went into force last week, but its lifespan could be short. Some at the meeting described the air of election night as one of disbelief.

“People are processing it,” said Steve Herz, a senior international policy advisor for the Sierra Club. “People are kind of shocked. I don’t there’s despair. I think it’s more like taking a hit and saying okay, we need to find a way forward.”

That’s because while stumping, Trump said he’ll pull the U.S. out of the landmark international agreement. Following official guidelines enacted by the agreement, he could pull out in four years. He could speed the timeline to one year by withdrawing from the original U.N. climate treaty, established in 1992, though such a move would risk considerable diplomatic repercussions.

The easiest path, however, would be to do nothing at all.

In practice, the Trump Administration may not need to do either of those two things,” said Kevin Book, managing director at ClearView Energy Partners.

“If the Trump Administration abandons its obligations under the Paris Agreement, there is very little incentive for some of the reluctant developing nations to proceed with their obligations,” he said. “And that could have the effect of scuppering the entire Paris Agreement, even without an explicit abrogation by the U.S.”

That would work well with another Trump promise, to limit the EPA’s power. His choice to lead the EPA transition team is said to be Myron Ebell, director of the Center for Energy and Environment at the conservative Competitive Enterprise Institute. Ebell is widely described as a climate change denier.

Rather than disband the agency or previously codified regulations though — both of which would be difficult — the EPA could be hamstrung simply by being kept from forming new rules.

“The biggest effect will presumably be a halt to further regulatory action by the EPA and other agencies that had characterized the Obama Administration and would have characterized a Clinton Administration,” said Richard Newell, president of Resources for the Future.

“What you had seen over the last, particularly over the last eight years, was a significant movement to start to regulate carbon dioxide emissions, and that was basically a work in progress,” Newell said. “So I think the biggest impact will be that, that will clearly stall and, I would say, probably move backwards somewhat.”