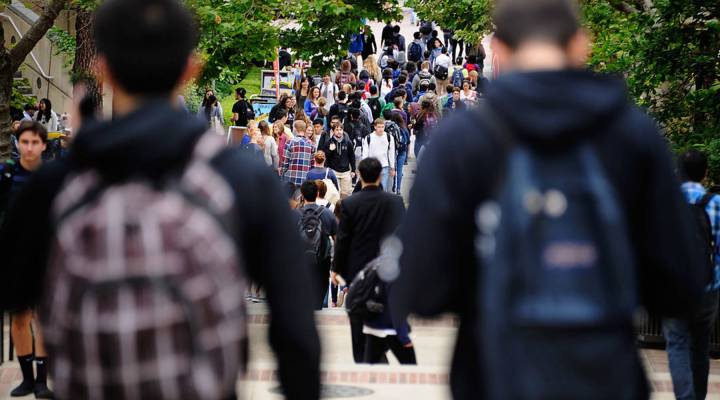 In the back room of an office supply store in Grand Junction, Colorado, six guys who call themselves Soul Habit practice for a holiday tree lighting concert. Tim Breckon, 29, is on the trombone putting his education to work. He also wrote the music.

Breckon has a bachelor’s degree and master’s degree in trombone performance, and about $78,000 in student loans.

“This month I’ll make my tenth or eleventh successful zero-dollar payment, which is what I can afford,” he said.

He can pay nothing because he’s in an income-based repayment plan and has never earned much above the poverty line. His music gigs don’t pay much. In the summer, he loads fire retardant onto planes that fight wildfires. The rest of the year, he waits tables at a steakhouse.

“I don’t think I really understood how much income I would probably be making and what I would be doing, getting music degrees,” he said.

Like most borrowers Breckon had to go through entrance counseling before getting that first loan check. It was online, and laid out the terms of the loan, his estimated future payments and what would happen if he defaulted.

“I guess the numbers were all pretty clear on paper, but who knows what an 18-year-old really knows about that sort of thing?” he said. “I just took it because it seemed like no one who had that much money would give it away without me being able to pay it back easily, you know?”

Now you might be wondering, why didn’t someone pull that 18-year-old aside and say, “are you sure you want to take on this much debt for degrees in trombone performance?”

“The law is clear that colleges can’t discourage students from getting the loans that they’re entitled to,” said U.S. Under Secretary of Education Ted Mitchell.

That’s right. Except in rare instances, colleges are not allowed to limit borrowing, Mitchell said, or to discourage someone like Tim Breckon from taking on too much debt. Federal student loans are an entitlement program, designed to ensure access above all. And while colleges must explain to students, once at the beginning and once at graduation, that they’ll have to pay those loans back, they can’t require any counseling in between.

“Congress wants to be very careful that we’re not creating impediments for students to getting the loans that they that they deserve, and that counseling doesn’t turn into a kind of discouragement — or in fact even a kind of redlining,” Mitchell said.

Those good intentions have helped land students in more than $1 trillion of debt. So, the Department of Education is launching an experiment to see if more loan counseling could help students make better decisions. Yes, student loan debt is at $1.3 trillion and the government is going to experiment with requiring more counseling.

“Think of it as sort of an annual checkup, where you would meet with a financial aid officer and talk about your program of study and how much debt you have incurred so far, what it would take to finish, and really work through a number of different options,” Mitchell said.

The hope is that extra counseling could also catch more students who drop out before graduation — students who are the most likely to default.

“That’s really the hidden story of student loan default in this country,” said Justin Draeger, president of the National Association of Financial Aid Administrators.  “It’s not the students who have racked up tens of thousands of dollars in loan debt. It’s the students who have relatively low amounts that have to, for whatever reason, drop out or stop out of school and then find themselves in a world of hurt when they default.”

Of course, colleges have been more than happy to take all this easy money. They can lose access to federal aid, if 30 percent of their former students default on their debt. But that’s rare, so lawmakers are looking for more ways to hold schools accountable. Families shopping for colleges are also paying more attention to student debt loads and repayment rates.

The experiment will also test different kinds of counseling. Many colleges rely on the federal government’s online program. It includes a few animated videos, and pages of text explaining concepts like capitalized interest and deferment vs. forbearance, with a little quiz at the end of each section.

A video from the federal government’s online entrance counseling tool.

“Some of the information is highly technical,” said Jennifer Wang, who directs the Washington, D.C. office of the Institute for College Access and Success. “It’s hard to decide what is relevant to a borrower’s particular situation and what is irrelevant.”

Trombonist Tim Breckon said he might have benefited from more loan counseling.

“I’m not 100 percent sure it would’ve made a difference, because I was probably especially idealistic and looking for a ticket out of the small town I was in at the time,” he said.

He hopes to start selling some of the jazz and classical trombone arrangements he’s been writing.

“I hope to make it pay off and I’m working on it,” he said. “If you’re going to look at it on a numbers basis, it’s going to be decades before we know if I made enough money from music to be worth it.”