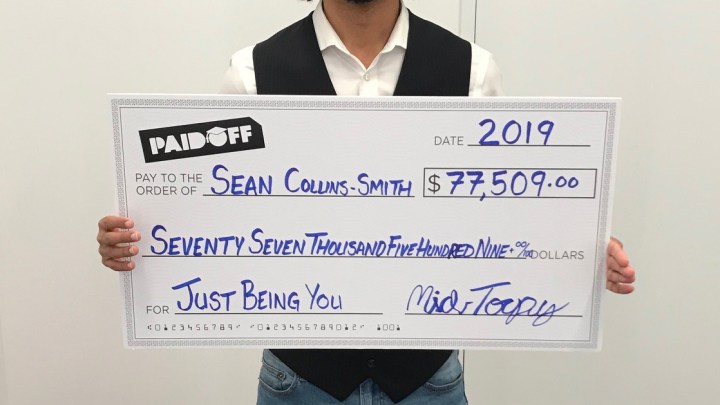 The U.S. national student loan debt is around $1.6 trillion, impacting 45 million Americans. It’s an issue that’s influenced the way people live their lives, from postponing big purchases like buying a house or a car, to not being able to properly save for retirement, to delaying major life plans.

One unlikely source is hoping to raise awareness of the issue of student debt while also helping the debtors. “Paid Off With Michael Torpey” is a student debt game show. Three contestants compete for the chance to pay off their debt by answering a wide range of questions on the TruTv program. The winners receive a payment in the amount of verifiable student debt they owe, but they are welcome to spend their winnings however they wish.

We spoke with some of the contestants on the show about their experience and what led them to compete for the money necessary to pay off their student loans.

Dana Stassen is an assistant director for a sleep-away summer camp. She went to the University of Maryland, where she received her degree in elementary education, and Towson University, where she received her master’s in education. Since she worked as a teacher after graduate school, Stassen had greater opportunities to pay off her master’s degree through federal grants. However, she still faced over $50,000 in debt from her undergraduate degree.

Her debt has prevented her from saving properly for retirement and from saving for her children’s potential college education.

Stassen placed second in her episode of “Paid Off,” where she won around $3,000. Not quite enough to tackle her loans, but enough to help her family.

When things like game shows, you know, that opportunity presents itself, it doesn’t seem that crazy or that far fetched to say, “Well, surely what I’m doing right now is not working.” So I’m going to give this, you know, other opportunity a chance and see if there is a way to get rid of this, all in one fell swoop. Instead of paying on, you know, a college degree for longer than most people pay a mortgage on a house.

Ryan Stadler is a high school Spanish teacher. He has two degrees, one in vocal performance and music, and another in Spanish education. After acting for almost 10 years, Stadler wanted to settle down with his wife and begin a family. Looking for a more reliable source of income, he turned to teaching. He won the $42,017 he owed in verifiable student debt on the show.

He used the majority of that money to pay off his student loans, but since state and federal taxes are taken out of the total winnings, he decided to save the rest of the money he won.

Sean Collins-Smith teaches journalism at Pierce College in Los Angeles. He majored in journalism and cinema at Virginia Commonwealth University. While filming his episode of “Paid Off,” Collins-Smith faced $78,000 in student loan debt, which included both his undergraduate and master’s degrees.

When Collins-Smith went to school in 2005, taking out student loans seemed like his only option. He had a good GPA, but it wasn’t quite high enough to get academic scholarships. To him, his debt was a fact of life, like a car payment or a mortgage. At one point, he was working three jobs and still could not make the suggested payments on his loans.

Collins-Smith won his episode of “Paid Off,” but he hasn’t yet paid off his loans due to state and federal taxes he will face on his winnings. Right now, he is looking to put that money toward a down payment on a condo.

We also spoke with the host and creator of the show, Michael Torpey. You can hear that conversation here.