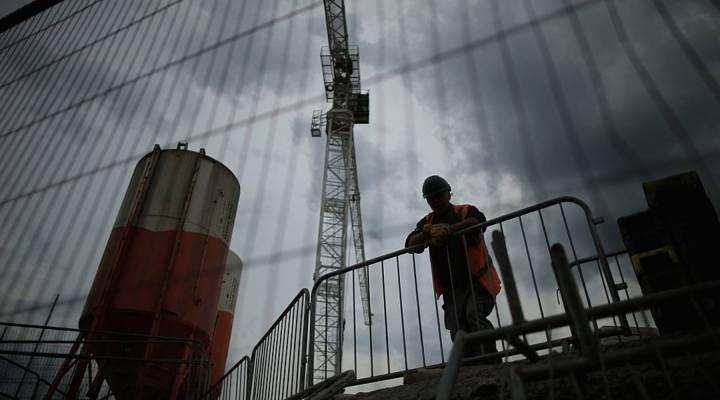 COPY
The newest economic poll from Marketplace Edison Research hints at our mixed feelings regarding employment: more people fear losing their jobs, yet at the same time appear confident about finding the next one. Christopher Furlong/Getty Images
Economic Anxiety Index®

The newest economic poll from Marketplace Edison Research hints at our mixed feelings regarding employment: more people fear losing their jobs, yet at the same time appear confident about finding the next one. Christopher Furlong/Getty Images
Listen Now

As in any election, the number one economic issue is jobs. Any politician worth his or her salt will tap into voters’ anxiety about employment – or perhaps their optimism. But how good or bad do Americans really feel about their job situation”?

The newest economic poll from Marketplace Edison Research suggests feelings are mixed: more people fear losing their jobs, yet at the same time appear confident about finding the next one.

Take Mike Cahill, a 51 year-old union pipe fitter at a fuel processing plant outside Philadelphia. He told our pollsters that he fears losing his job “a lot” in the next 12 months, because construction work in his sector could fall off in that period.

“Are we in a boom-bust cycle?” Cahill asked. “Is all this work going to start wrapping up at the same time? You know it could be at the same time next year there could be substantial unemployment in the building trades.”

In our poll, just 14 percent of people shared the same job-loss fear as Mike Cahill a year ago. But today, that fear has more than doubled, to 30 percent. That anxiety doesn’t sync with the broader job market, which in general terms is doing well.

“There’s very little basis in reality for fear,” said Andrew Chamberlain, chief economist at the online job site Glassdoor. “The rate of layoffs is really at an all-time low. Claims for unemployment insurance are the lowest since the 1970s. There’s a record number of openings, 5.5 million unfilled jobs.”

So where is the job-loss anxiety coming from? A number of respondents and analysts suspect an election-year blathering effect. All this talk of jobs supposedly shipping out, fleeing, “taken away from us like babies,” in the words of Republican Donald Trump, may be warping our reality.

But here’s the twist: more than half our respondents said if they were to lose their jobs, they’re “very confident” in finding the next one. 53 percent responded that way in early October 2016, up from 41 percent in May and 46 percent  in September 2015.

“I’m sure I’ll be able to get a job,” said poll respondent Dan Marcotte, 45, a solar energy installer on Long Island. “But the problem is, I’ll probably have to take about a cut in pay. You know, make about half as much as I’m making now, type of thing. That seems like what the jobs are out there now.”

Settling for less is an increasing reality for Americans with mid-level skills and middle incomes – what many labor economists call a “hollowing out of the middle.”

“More workers who, when they lose a job, are going to be more likely pushed down,” said economist Linda Barrington, executive director of the Institute for Compensation Studies at Cornell University. “That’s a longer run trend that we’ve seen since the Great Recession and throughout the recovery.”

In other words, there are jobs to be found. Whether they’re good jobs is another question.