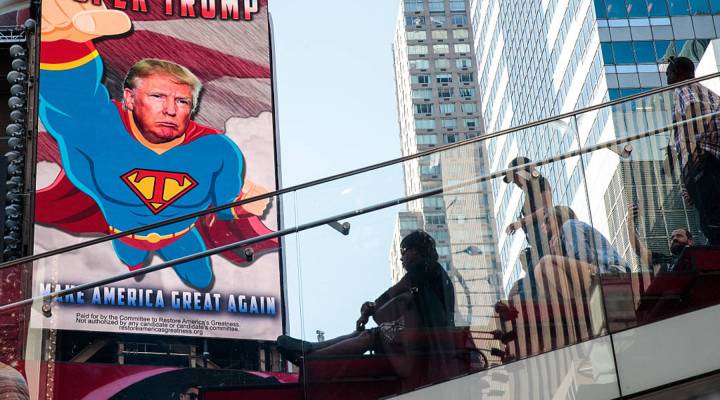 Given that it is election season, there is a particular bit of audio we’ve all heard dozens, if not hundreds of times. “I’m candidate X, and I approved this message.”

So we at Marketplace wondered — when exactly why did “approving a message” become a thing?

Personally, I physically cringe every time I hear that ubiquitous phrase pop up on TV or radio.  It just seems obvious, and more than a little bit dorky.

Turns out there is a good reason for forcing candidates to add the disclaimers, and that reason is accountability.

Politicians have been taking pot shots at each other since basically, forever. Thomas Jefferson’s for instance accused his opponent, President John Adams of having a:

“Hideous hermaphroditical character, which has neither the force and firmness of a man, nor the gentleness and sensibility of a woman.”

Now, Jefferson was careful not say that himself, but his surrogates did.

Fast forward nearly 200 years and while the attacks are less brazen (sort of), figuring out exactly who was launching the attack was often still a mystery. Case in point, the  infamous 1988 “Willie Horton” TV ad.  The ad was little more than a mugshot of a black man, William Horton, a convicted murderer who was allowed out of prison as part of a weekend furlough program. Horton later fled and committed more crimes.

As attacks go, this one was devastating for Michael Dukakis, even though Dukakis inherited the program from his Republican predecessor. The ad was also widely criticized as a racist dog whistle for white suburban voters. When the Bush campaign was questioned about these issues it simply claimed to have no role in the ad’s production.

Oregon Democrat Ron Wyden was also on the receiving end of anonymous attacks during his 1996 campaign Senate.

“I was just struck by the fact that you couldn’t tell who was running ads,” Senator Wyden said.

Wyden ended up winning that election and when he got to Washington D.C. he was determined to come up with a fix. He rallied up support for a bill which ultimately became the “Stand by Your Ad” provision.

“Stand by your ad provides another reason why candidates will say to themselves, ‘you know, that’s something that people can actually hold me personally responsible for’,” Wyden recalled.

The provision was later added into the McCain-Feingold Campaign Finance Reform Act of 2002. So stand by your ad became law and people started hearing the disclaimers during the 2004 presidential election.

“Initially it was true that we saw a change, it didn’t last long,” Kathleen Hall-Jamieson said, Director of the Annenberg Public Policy Center.

Hall-Jamieson said campaigns quickly found new ways to obscure precisely who is approving what. One trick was to simply put the disclaimer at the top of the ad.

“So, ‘I’m Hillary Clinton, or I’m Donald Trump and I approve this message’, and then the attack proceeds from there,” she said.

“You lose track of the fact that the candidate was identified up front and by the end you’re not paying a lot attention to the print on the screen at the end.”

When Stand by Your Ad was passed back in 2002, the modern internet was still barely a thing. Meaning digital ads, of the sort and stripe that we are used to today, weren’t even covered under the law, only TV and radio spots, or ads paid for directly by the campaign.

“Posting something on your website or putting a video up on Tumblr, or just uploading things to your YouTube channel, you’re not required to do that at all,” Joe Rospars said.

Rospars is the CEO of Blue State Digital, the company that handled online advertising for both Obama campaigns.

“We created thousands and thousands of pieces of video content, and ran tens of millions of dollars in digital advertising that did not have that “I’m Barack Obama and I approve this message’,” Rospars said.

If nothing else Rospars says, the provision means campaigns only have 27 seconds instead of 30 to launch an attack. So, progress.

Attempts have been made recently to update the law. In 2014 Congressman David Price introduced the Stand by Every Ad Act, but it has yet to come up for a vote.