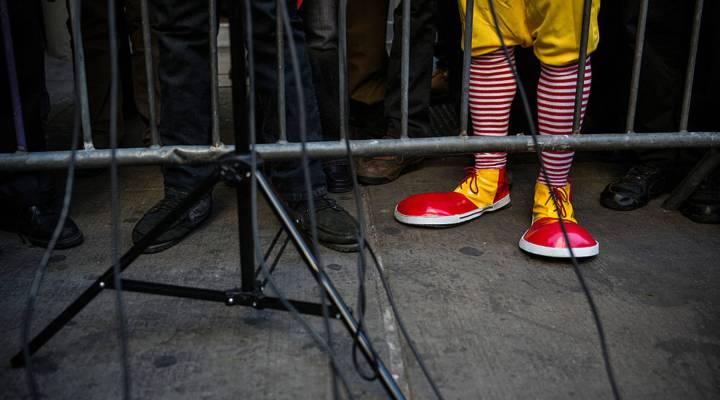 A man dressed as Ronald McDonald at a protest on March 18, 2014 in New York City. Andrew Burton/Getty Images
Listen Now

Well, this is just sad.

So you know the whole weird scary clown thing that’s going on? Sightings in the woods, copycats, school lockdowns, a slew of arrests, a comment from the White House and general social media hysteria? No? Atlas Obscura has a comprehensive map of sightings, and here’s an explainer from Vox.

Aside from the sad state of the clowning business, there hasn’t really been a business angle … until today.

McDonald’s has cut back on public appearances of Ronald McDonald, because of all those creepy clowns.

“McDonald’s and franchisees in the local markets are mindful of the current climate around clown sightings in communities,” a spokesperson told Buzzfeed. “As such [they] are being thoughtful in respect to Ronald McDonald’s participation in community events for the time being.”

Now, you might argue Ronald McDonald was already a little weird and scary, but still.

It’s about time someone put a stop to Ronald McDonald. That jerk has been scaring me since I was a kid.