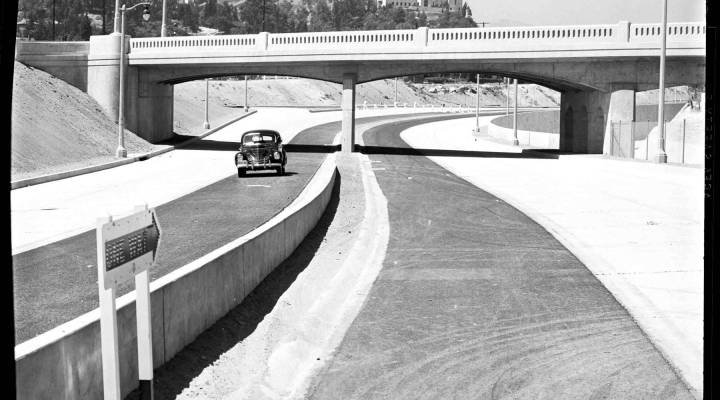 People who live in crowded urban areas often complain about car traffic and wring their hands over how much it costs in lost productivity. But congestion itself is also a sign of thriving economic activity. Perhaps no city complains as bitterly about traffic as the so-called car capital, Los Angeles. However, there was a time not so long ago when residents used to boast you could get anywhere in the city in 20 minutes.

“I heard it and I trusted it at least in the first decade of driving that I did,” said Michael Alexander, who grew up in LA.

In the summer of 1964, he was a newly-minted teenage driver, the freeways had just been built and the Beach Boys were crooning on the radio about how neat it was to drive around.

Alexander got a job as a clown in the LA City traveling circus. Every week he performed at a different park, from the northern reaches of the San Fernando Valley, south to the ports. He drove from place to place in his parents Nash Rambler in roughly 20 minutes.

“We were truly able to ride the speed limit at any time of the day,” he said.

Traffic analytics firm Inrix names LA traffic the worst in the world, citing the hundred hours a year drivers are stuck in it. The report estimates that cost the economy $19 billion last year in time, fuel and expenses passed on to consumers.

The story of how city residents went from getting around to getting stuck behind the wheel starts less than a mile from Alexander’s home at one of the earliest freeways in the country, the Arroyo Seco Parkway from Pasadena to downtown LA.

“It’s important to me for the same reason the ruins of Pompeii are important to a scholar of ancient Rome,” said Matthew Roth, the historian for the Automobile Club of Southern California.

Traveling towards downtown, the narrow curving lanes of the early freeway transform into a tangled forest of curving ramps which opens into a vast terrifying confluence of 12 lanes of traffic as three freeways intersect.

These concrete landscapes were pioneered in California in the post-war years. From the mid-1950s to the mid-1960s, the state built nearly a hundred miles of freeway a year — a system that became a model for the rest of the country. But the freeway building boom didn’t last long.

“Almost as quickly as it began you have this peak and then drop,” said Brian Taylor, an urban planning professor who directs UCLA’s Institute of Transportation Studies.

By the 1970s, Taylor said, funding had dried up and cities were pushing back against displacement and smog. The freeway frenzy came to an end, but it’s legacy can still be felt.

“These facilities supported development very far from the city center and created an expectation that it was somehow normal and reasonable to travel very far,” he said.

Like Michael Alexander driving 20 miles for his clown job in just 20 minutes. Taylor said that ease of movement was bound to be short-lived.

“Cities exist because they push lots of activities together in a place,” he said. “But when you push things together, things get crowded.”

Congestion, not free movement is the natural state of thriving cities. What Michael Alexander experienced in 1964 was an anomaly brought on by a burst of new capacity.

Since then, LA has exploded, pushing more things closer together — not just cars and people, but jobs, restaurants and artisanal kombucha bars.

So even though Michael Alexander can’t drive 20 miles in 20 minutes anymore, he doesn’t necessarily have to — before he retired he worked six miles from home.

“I did have a 20-minute drive that was wonderful,” he said.

This story originally ran on KPCC  as part of a journalism collaboration exploring the California Dream.