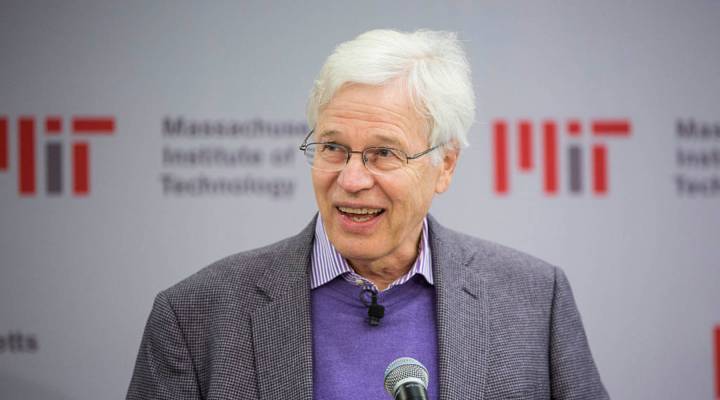 COPY
IT Professor Bengt Holmstrom during a press conference at MIT announcing his shared Nobel Prize in Economics with Harvard Professor Oliver Hart on October 10, 2016 in Cambridge, Massachusetts. Holmstrom and Hart won the prize for their work on contract theory.  Scott Eisen/Getty Images

IT Professor Bengt Holmstrom during a press conference at MIT announcing his shared Nobel Prize in Economics with Harvard Professor Oliver Hart on October 10, 2016 in Cambridge, Massachusetts. Holmstrom and Hart won the prize for their work on contract theory.  Scott Eisen/Getty Images
Listen Now

The Nobel Prize for economics was announced early this morning. It went to two economists, one British by way of Harvard, one Finnish by way of MIT, for their work on contract theory: how contracts and incentives work in real life, and what that means for negotiating good ones.

In the simplest terms, contract theory is about getting the best bang for your buck.

Nobel laureate number one is Bengt Holmstrom of MIT, in part for his work on labor contracts and incentives.

Here’s an example: factory managers often pay workers per item produced. But if schools paid teachers in a similar way, based on student test scores, it would bring trade-offs. Teachers might focus on the wrong thing.

“We want them to raise our kids to be creative, to be mensches,” said economist Steve Tadelis of the Haas School of Business at UC Berkeley. “You will force them to just spend all their energy on that one thing, because that’s what they are getting paid for.”

Awardee number two: Oliver Hart of Harvard. Much of his work focuses on contracts and uncertainties and has been applied to governments and privatization. A local government might privatize trash pickup and find it saves money, with few trade-offs. But if it privatized a prison it might find corner-cutting, and that prisoners weren’t fed enough.

Harvard Professor Oliver Hart during a press conference at Harvard announcing his shared Nobel Prize in Economics with MIT Professor Bengt Holmstrom on October 10, 2016 in Cambridge, Massachusetts. Hart and Holmstrom won the prize for their work on contract theory.

“The right answer is not privatize everything, the right answer is not have collective ownership for everything,” said economist Roger Myerson of the University of Chicago, himself a past Nobel economics winner for his work on game theory. “A good theory needs to be able to go both ways, precisely the kind of theory we need to understand the real world.”

This prize is not just about theory. Holmstrom and Hart’s work helps people write and negotiate good contracts. This being baseball playoff season, several stars are in their last contract years and playing for the next one.

“They have tremendously strong incentives to perform at the very highest level,” said Jonathan Levin, economist and dean of the Stanford Graduate School of Business. “In the first year of a ten-year contract, maybe the incentives are a little weaker, because their pay is guaranteed for the next ten years.”

Contract theory helps a team structure deals and maximize its investments. Understanding the Moneyball of life – in all its contract forms — is what this year’s prize is about.