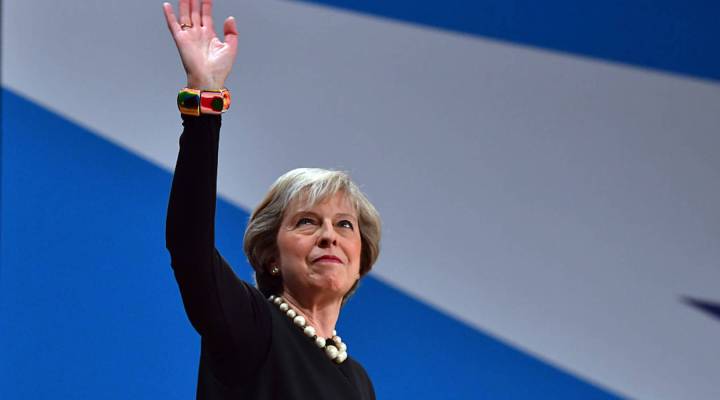 COPY
British Prime Minister Theresa May waves after delivering a speech about Brexit on the first day of the Conservative Party Conference 2016 at the ICC Birmingham in Birmingham, England.  Carl Court/Getty Images

British Prime Minister Theresa May waves after delivering a speech about Brexit on the first day of the Conservative Party Conference 2016 at the ICC Birmingham in Birmingham, England.  Carl Court/Getty Images
Listen Now

So now we have a date for Brexit. By no later than March next year the British government will have begun negotiating the terms of the UK’s departure from the European Union and , under EU law, the UK should be out of the bloc by  March 2019.  British Prime Minister Theresa May unveiled the timetable at her annual party conference and  she also revealed she’ll play hardball with her European partners. That delighted the so-called “Hard Brexiters”, while disheartening  those in the “Soft Brexit” camp.

In her conference speech, Prime Minister May stressed that one of the ways in which she will be asserting Britain’s independence from the EU is by regaining control over British immigration policy, ending the automatic right of citizens from other EU countries to live and work in the UK. At the same she is aiming to retain full, tariff-free and unfettered access  to the European market for British companies.

The so-called “Soft Brexiters”, who want only a partial departure from the EU, dismissed May’s demand as unrealistic. EU leaders have repeatedly said Britain cannot have full access to the single market without upholding the principle of the free movement of people; the UK must keep its borders wide open to all EU migrants if it wants to enjoy the free movement of goods and services throughout the bloc.

Sam Bowman, a Soft Brexiter from the free market Adam Smith Institute, says Britain cannot expect to get everything it wants from its European partners.

“They’re not going to give us the perfect, sweetheart deal that would make everyone else in the EU want to leave as well.” he claimed.

But Britain has a 60 billion euro trade deficit with its European partners. Will the EU impose tariffs and erect other trade barriers against Britain when that would harm the rest of the EU more than the UK?

Bowman argues that the EU’s overriding objective will be to keep the union together and not to allow one departing member (like Britain) to cherry pick the benefits of membership.

That is precisely what Hard Brexiters want to do: demand a free trade deal with the EU and not offer anything in return. Former cabinet minister John Redwood is Hard Brexit incarnate.

“I don’t believe that Britain should continue to pay any contributions to the EU budget, or accept a restricted versions of free movement. These are non-negotiable. Britain has decided to be independent. Being independent means not paying subsidies to other countries and it means controlling your own borders.” Redwood said.

Real estate tycoon Richard Tice, who bankrolled one of the Brexit campaign groups, urges Britain to walk away from the negotiations if it doesn’t get exactly what it wants from its European partners.

“No deal is better than a bad deal.” Tice said. “There is this myth that you have to be a member of the EU in order to trade with it. You don’t. And actually we do better outside the EU than we do inside the EU. The UK  has more success selling services to the US without a trade deal, than it does with the EU as a member of Europe’s Single Market” he said.

The euroskeptics are on a roll. Theresa May seems to be moving in their direction. Financial markets remain fairly buoyant. But there’s maybe 2 ½ years to go. It’s still way too soon to say whether hard or soft is the better Brexit.