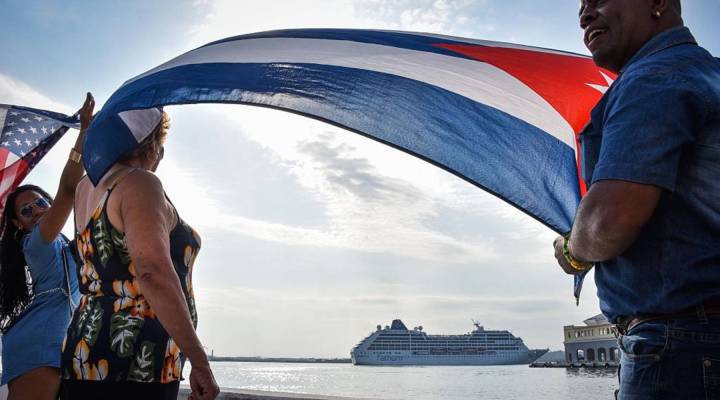 Cubans wave a U.S. and a Cuban flag at the Malecon waterfront as the first US-to-Cuba cruise ship to arrive in the island nation in decades glides into the port of Havana, on May 2, 2016. ADALBERTO ROQUE/AFP/Getty Images

Cubans wave a U.S. and a Cuban flag at the Malecon waterfront as the first US-to-Cuba cruise ship to arrive in the island nation in decades glides into the port of Havana, on May 2, 2016. ADALBERTO ROQUE/AFP/Getty Images

Donald Trump’s company broke the U.S.-Cuba embargo in 1998 by sending consultants to the island to research a business venture, Newsweek reported today.

The company, Trump Hotels & Casino Resorts, reportedly spent at least $68,000 for the trip, according to the report. Trump has since sold the business and the U.S. government has since relaxed the economic sanctions against Cuba. But two decades ago, businesses couldn’t spend any money in Cuba without permission from the U.S. government.

Trump’s campaign manager Kellyanne Conway did not deny that the company spent the money.

“Read the entire story. It starts out with a screaming headline, as it usually does, that he did business in Cuba,” she said on ABC’s “The View” today.  “And it turns out that he decided not to invest there….As I understand from the story, they paid money in 1998 — and we’re not supposed to talk about years ago when it comes to the Clintons, but when it comes to Trump there is no statute of limitations ever.”

While Conway dismissed the notion that paying for a consultant’s trip meant Trump was conducting business in Cuba, U.S. regulation in 1998 would have dictated otherwise.

“The way the regulations were enacted at that time, it goes beyond not doing business,” said Pedro Freyre, an adjunct professor at Columbia Law and a lawyer at Akerman LLP, a law firm specializing in financial services and real estate.

The embargo prevented U.S. citizens from having any kind of financial dealings with Cubans unless they were specifically authorized by the U.S. government, namely the Office of Foreign Assets Control, or OFAC, according to Freyre.

“The conceptual underpinnings of the embargo was to shut down all commercial financial relations with Cuba, with very specific exceptions,” he said. Those exceptions included family travel and humanitarian or religious activities.

Today, the embargo is less of a barrier to business in Cuba. The U.S. government has been loosening restrictions to doing business in Cuba for the last couple years. The latest milestone was in August, when the U.S. allowed commercial air travel to Cuba.

Freyre said interest from companies wanting to do business in Cuba has “grown exponentially” since December 2014, when President Barack Obama vowed to begin lifting restrictions. The government’s recent actions have created what he called a “swiss cheese” embargo. The tourism industry — airlines, cruise lines, hotels — has been especially interested in doing business in Cuba.

“These are business that want to take advantage of the holes in the cheese,” he said.