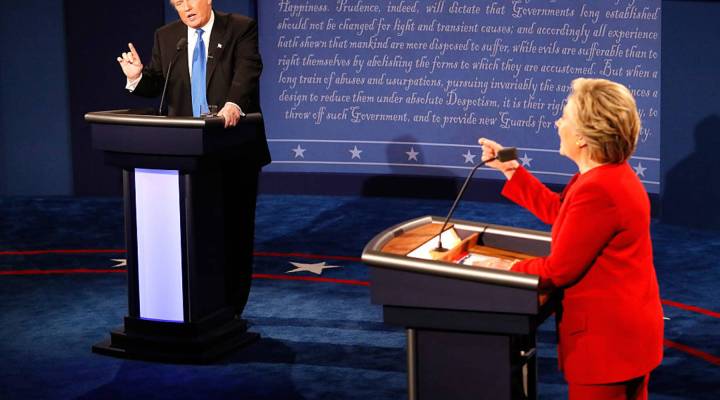 NBC’s Lester Holt moderated the debate, and he also asked about cyber security and race relations but, since we’re Marketplace, we were especially interested in the “achieving prosperity” notion. Here are some of the highlights related to the American economy, along with commentary from our experts:

“Our jobs are fleeing the country. They’re going to Mexico. They’re going to many other countries. You look at what China is doing to our country in terms of making our product. They’re devaluing their currency, and there’s nobody in our government to fight them. And we have a very good fight. And we have a winning fight. Because they’re using our country as a piggy bank to rebuild China, and many other countries are doing the same thing.” – Trump

Actually,@realDonaldTrump, manufacturing jobs are very stable now after a big loss in the 2000s.

Trump has talked about China taking away manufacturing jobs throughout campaign, but he may be railing against an outdated enemy. Manufacturers have less use for the country’s cheap labor and the yuan has actually appreciated.

Trump also spoke about Ford leaving for Mexico, which he previously called “disgraceful.”  Ford clarified it’s not closing its plant near Detroit, so no jobs will be lost in the move.

“And what you do is you say, fine, you want to go to Mexico or some other country, good luck. We wish you a lot of luck. But if you think you’re going to make your air conditioners or your cars or your cookies or whatever you make and bring them into our country without a tax, you’re wrong.

For the record: presidents can’t ‘not let jobs leave.’

Trump jobs plan seems to be mostly making companies keep jobs in US. How, though? Tax policy alone can’t redress the cheap-labor balance.

“Under my plan, I’ll be reducing taxes tremendously, from 35 percent to 15 percent for companies, small and big businesses. That’s going to be a job creator like we haven’t seen since Ronald Reagan. It’s going to be a beautiful thing to watch.” – Trump

“We also, though, need to have a tax system that rewards work and not just financial transactions. And the kind of plan that Donald has put forth would be trickle-down economics all over again. In fact, it would be the most extreme version, the biggest tax cuts for the top percent of the people in this country than we’ve ever had. I call it trumped-up trickle-down, because that’s exactly what it would be. That is not how we grow the economy.” – Clinton

Holt explains why candidates release tax returns. Don’t Americans have a right to know if there are conflicts of interest? #debate2016

Trump has repeatedly refused to release his returns, citing an audit. It turns out, tax lawyers will always advise a client to take the least risky path, but people are free to release their returns for public scrutiny. He challenged Clinton on her use of a private email account to handle classified information.

Clinton tried to change the subject back to taxes, but after Holt pressed, answered:

“You know, I made a mistake using a private e-mail… And if I had to do it over again, I would, obviously, do it differently. But I’m not going to make any excuses. It was a mistake, and I take responsibility for that.” – Clinton

Trump went back to trade multiple times. It’s caused concern among Americans who blame trade policy for the loss of manufacturing jobs, and created division within the Democratic party. Trump called NAFTA, the trade deal signed by Clinton’s husband President Bill Clinton, “the worst trade deal maybe ever signed anywhere, but certainly ever signed in this country.”

He also brought up Hillary Clinton’s support for the the Trans-Pacific Partnership, or TPP. It’s been a tough sell for President Barack Obama and other politicians, with the Democrats recognizing the mixed feelings around the policy in their platform.

“And now you want to approve Trans-Pacific Partnership. You were totally in favor of it. Then you heard what I was saying, how bad it is, and you said, ‘I can’t win that debate.’ But you know that if you did win, you would approve that, and that will be almost as bad as NAFTA. Nothing will ever top NAFTA.” – Trump

After Holt asked about Trump’s recent “birther” flap, Clinton took Trump to task on his reported record of discrimination.

“But, remember, Donald started his career back in 1973 being sued by the Justice Department for racial discrimination because he would not rent apartments in one of his developments to African-Americans, and he made sure that the people who worked for him understood that was the policy. He actually was sued twice by the Justice Department. So he has a long record of engaging in racist behavior. And the birther lie was a very hurtful one. You know, Barack Obama is a man of great dignity. And I could tell how much it bothered him and annoyed him that this was being touted and used against him.” – Clinton

“Now, as far as the lawsuit, yes, when I was very young, I went into my father’s company, had a real estate company in Brooklyn and Queens, and we, along with many, many other companies throughout the country, it was a federal lawsuit, were sued. We settled the suit with zero — with no admission of guilt. It was very easy to do.” – Trump

“If your main claim to be president of the United States is your business, then I think we should talk about that. You know, your campaign manager said that you built a lot of businesses on the backs of little guys. And, indeed, I have met a lot of the people who were stiffed by you and your businesses, Donald. I’ve met dishwashers, painters, architects, glass installers, marble installers, drapery installers, like my dad was, who you refused to pay when they finished the work that you asked them to do.” – Clinton

Clinton mentioned of the thousands of lawsuits against Trump alleging that he has not paid the companies that have done work for him. Trump’s respond by highlighting his successful businesses.

“But what she doesn’t say is that tens of thousands of people that are unbelievably happy and that love me. I’ll give you an example. We’re just opening up on Pennsylvania Avenue right next to the White House, so if I don’t get there one way, I’m going to get to Pennsylvania Avenue another. But we’re opening the Old Post Office. Under budget, ahead of schedule, saved tremendous money. I’m a year ahead of schedule. And that’s what this country should be doing.” -Trump

We’ve heard about this notion about his new hotel before. 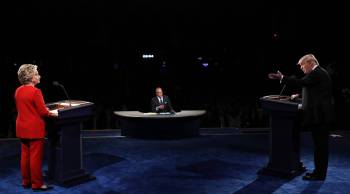 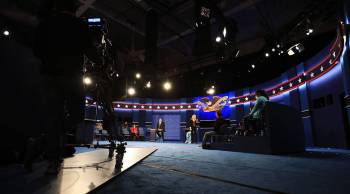 Debate 2: Clinton and Trump face off in a town hall