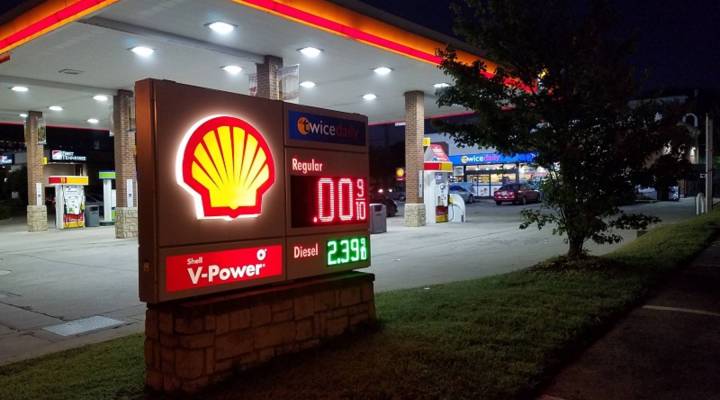 COPY
Zeroed out: A a Shell station in Nashville was out of gas earlier during the Colonial Pipeline closure. Chas Sisk/WPLN

Zeroed out: A a Shell station in Nashville was out of gas earlier during the Colonial Pipeline closure. Chas Sisk/WPLN
Listen Now

If you drove past a gas station in Nashville last weekend, you might have seen bags over the pumps or else a really long line of cars. Not even minor celebrities were spared.

At an Exxon station on Monday — which had gas and no lines — Tennessee Titans punter Brett Kern was finally filling up. His car was almost on empty.

“I was 0 for 6 on Saturday, 0 for 3 yesterday, and then I called about four stations this morning. This was the first one that had it,” he said. “I told my wife to, first of all, have her phone by her just in case I ran out of gas, and then to have our second car ready to go.”

This hassle — and a rise in gas prices that also started over the weekend — came after a leak was discovered Sept. 9 in the Colonial Pipeline, which is Tennessee’s primary provider of gasoline. The pipeline’s closure meant some gas stations weren’t getting enough fuel, said Mike Williams, executive director of the Tennessee Petroleum Council.

But the decrease was manageable — until, abruptly, a full week later, people started noticing it. Reporters started reporting on it. Then the governor declared a state of emergency, which really just allowed fuel transporters to work longer hours, but it sounded alarming, Williams said.

“The buying public starts getting nervous,” he said, “and in this case, they got so nervous that they rushed out and bought every drop of gasoline there was.”

“I would say that probably about 90 percent of this was caused just by panic buying,” Williams said.

But Mary Holcomb, a professor of supply chain management at the University of Tennessee, didn’t completely agree. Yes, there was huge spike in demand, she said — but a pipeline closure is also a very real disruption in supply.

“As best I can tell from the numbers that were reported, we are only receiving about a third of the supply that we ordinarily would have,” Holcomb said.

She said Tennessee would have seen shortages no matter what. The panic just sped it up.

Now, things are returning to normal. Colonial Pipeline restarted Wednesday evening, which means Nashville get its full supply of gas again in the next few days.