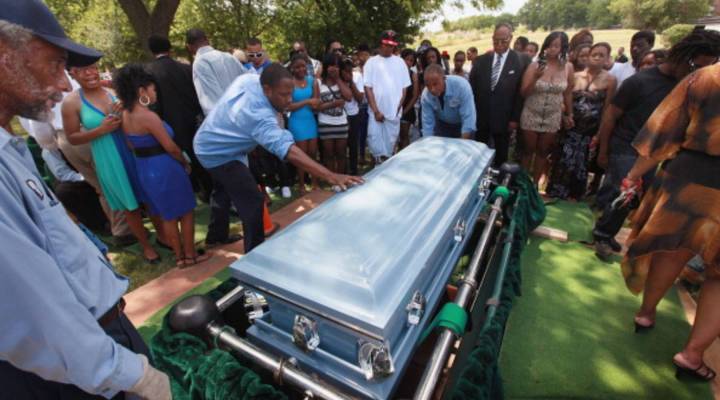 COPY
A young victim of Chicago's gun violence is laid to rest.

A young victim of Chicago's gun violence is laid to rest.
Listen Now

Over Labor Day Weekend, Chicago’s death toll hit 500, making 2016 one of the most violent years in decades. That’s more homicides than Los Angeles and New York combined. It hasn’t been this bad since the crack cocaine-fueled gang wars of the 1990s. But focusing on the numbers alone doesn’t do justice to what’s actually happening, and more importantly, how we can end the violence. Natalie Moore, a Chicago native and longtime WBEZ Southside reporter, joined Marketplace Weekend to discuss the role economic inequality plays in urban violence today.

What is your sense of how economic opportunity and this particular rise in violence are linked?

I think that that of course these are individuals who are making decisions about picking up a gun, but I think that we fail ourselves in solutions when we just look at this as individual problems and not look at the structural problems in neighborhoods. So I mentioned that we see high poverty and crime linked together, unemployment, but these neighborhoods don’t have a lot of businesses, there’s disinvestment. And you can’t talk about these issues without talking about economics. So I look at violence as a symptom of lack of economic development.

When you talk to people in government and in the community, what kinds of solutions do you hear?

Not very good ones quite frankly, I’m just gonna be honest. This is not a policing issue, and I think a lot of elected officials say we need more police on the streets. But if you go into neighborhoods, people are not clamoring for police, the police do not prevent violence and they are not a catalyst for social change or for economic change. So it’s also often looked at “Well, why is New York less violent than Chicago? Why is L.A. less violent?” One: Chicago has always been more violent than those cities going back to the days of Prohibition, but Chicago is also more segregated than those neighborhoods [cities]. Segregation isn’t about black people needing to live next to white people; it’s about resources and proximity to resources and inequity. And decades of bad housing policies that have created black ghettos are not going to be reversed overnight. It’s less sexy to talk about housing segregation and unequal resources when you’re talking about gun violence. Those are structural issues in neighborhoods issues and policy-driven issues that will go a long way in decreasing violence.

So what’s standing in the way of Rahm Emanuel or someone else in Chicago in power from saying, “OK, let’s talk about that stuff?”

So, you know, I ask myself these questions, I struggle with these questions myself, and I see a lack of political will, I see politicians saying, “Well it’s not my job to take on segregation.” This is what defines Chicago, and the drumbeat that I’ve been banging is we can’t look at any of these issues without addressing segregation and segregation is not about self-selection; this is about past and current policies that keep neighborhoods under-resourced and underserved.