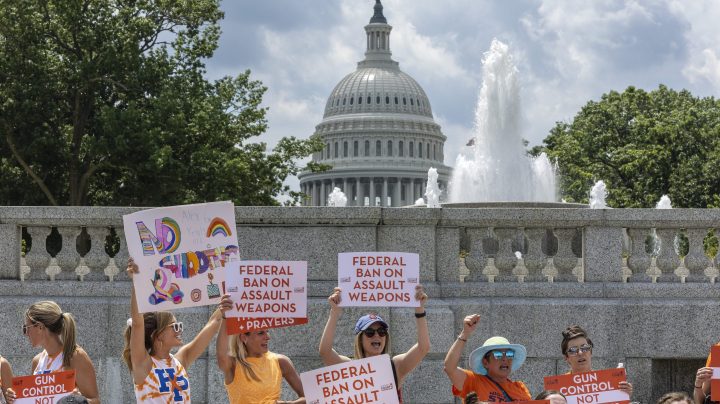 COPY
The new law includes funding and legislation for mental health facilities. But only 3% to 5% of violent acts are committed by people with serious mental illnesses. Kevin Dietsch/Getty Images

The new law includes funding and legislation for mental health facilities. But only 3% to 5% of violent acts are committed by people with serious mental illnesses. Kevin Dietsch/Getty Images
Listen Now

The mass shooting in Uvalde, Texas, along with the multitude of mass shootings this country regularly experiences, prompted the “most significant gun measure to clear Congress in nearly three decades,” as The New York Times called it.

Yet, much of what’s in that law is actually about mental health.

Kimberly Adams: This bill does have provisions to help combat gun violence, but almost all of the money in it goes towards mental health. Why is that?

Victoria Knight: That’s basically because of a dynamic set up in the Senate which was that Republicans said they would only agree to having some kind of gun reform legislation if it was also packaged with mental health funding. And Democrats said, “OK, we’re OK with that. We want more funding for mental health, and if that is the way to get you guys to agree to some gun reform, then we’ll do it.” And that’s kind of how it happened. But I will say that mental health advocates, they feel conflicted that it was packaged with the gun reform legislation right beside it all in one bill because it does, I think, especially to the American public, kind of give a message that these two things are related, when really research shows that people with mental health disorders are not violent. Only 3% to 5% of violent acts are committed by people with serious mental illnesses. It’s a very, very low number, but packaging them together does continue to perpetuate the idea that gun violence and mental illness are related.

Adams: So what exactly is in this particular law in terms of mental health?

Knight: So there is a lot in terms of mental health. The total bill cost is $13 billion, and most of that is going towards mental health funding. So a really big chunk, $1 billion, is going to amp up the number of mental health counselors in schools. Then another really, really large chunk of $8.6 billion is for the buildout of something called certified community behavioral health clinics. And right now, those clinics are set up in 10 states. They were done through a pilot Medicaid program. But this bill would allow that to expand to all states if states want to do it. Basically, these are clinics where anyone who is experiencing a mental health crisis can show up and get treatment, no matter whether they have health insurance. And they’ve been shown to have some success in the states that they already exist in. And one other notable thing that mental health advocates are really excited about is $150 million being allocated for the new 988 suicide prevention hotline, which actually rolled out this past weekend.

Adams: When can people expect to see or experience expanded access to mental health care as a result of some of the things coming out of this new law?

Knight: There is funding allocated this year, such as the 988 suicide prevention lifeline, but for some of the other programs, funding doesn’t start until next year or 2024, such as for the certified community behavioral health clinics. So there will be a delay in some of those programs that I do think people wonder, “Well, what are we going to do in the meantime until this funding starts?” And that’s a real question.

Adams: What’s the general consensus about how much this law will actually do to reduce gun violence in this country?

Knight: That’s a great question. And I’m not sure we will know the answer. A lot of these programs are not necessarily evaluated for how effective they are. But there is a consensus that it will likely reduce the number of deaths by suicide and that is because in this bill there is the ability for states to implement red flag laws. These laws allow for a family member, a friend, sometimes a doctor, depending on the state, to petition a court and ask for a gun to be taken away from someone who they believe is at risk of harming themselves or harming others. And those laws have been shown to reduce deaths by suicide.

Adams: And a big chunk of overall gun deaths in this country for sure.