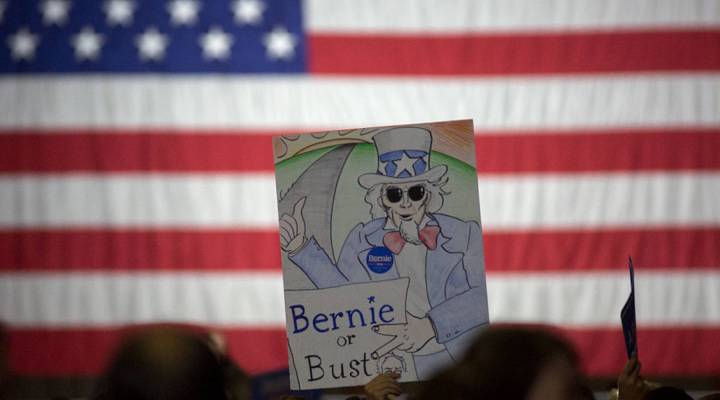 COPY
A man holds up a sign at the California primary election night rally for Democratic presidential candidate Senator Bernie Sanders in Santa Monica, California. Many Sanders supporters have answered the Senator’s call and say they will vote for Clinton, but that support may not translate to donations.       David McNew/Getty Images

A man holds up a sign at the California primary election night rally for Democratic presidential candidate Senator Bernie Sanders in Santa Monica, California. Many Sanders supporters have answered the Senator’s call and say they will vote for Clinton, but that support may not translate to donations.       David McNew/Getty Images
Listen Now

Both presidential candidates are trying to appeal to a broad variety of voters. Hillary Clinton and Donald Trump particularly want—and need—voters who supported their opponents during the primaries.

For Hillary Clinton, that means reaching out to supporters of Vermont Senator Bernie Sanders. Many Sanders supporters have answered the Senator’s call and say they will vote for Clinton, but that support may not translate to donations.

Miami attorney Kira Willig was a Sanders delegate at the Democratic National Convention back in July. She said then she was willing to vote for Clinton, but not donate to her campaign.

“I admit, I get an e-mail from her every day asking me for a dollar,” said Willig, sitting primly with the Florida delegation at the DNC, “Bernie didn’t ask me to give her money, he asked me to vote for her.”

But dollars in a presidential campaign, especially in the digital age, are about more than just funding the campaign. Michael Heaney, a political sociologist at the University of Michigan, said Clinton doesn’t really need the money as much as she needs some of that “Bernie or Bust” enthusiasm to rub off on her.

“The people who contribute to political candidates almost always show up and vote on election day,” Heaney said, even if they’ve only donated a small amount.

Bernie Sanders has been trying to get his supporters to turn out for Clinton, and has been campaigning on her behalf in states like New Hampshire, where he has a lot of support.

Kira Willig was a Bernie Sanders delegate at the Democratic National Convention in July.

But even Sanders acknowledged after the convention on CBS’ “Face the Nation” it was going to be tough getting his die-hards change gears.

“We have over 13 million people who supported my candidacy, and I have no doubt that there are some of those people who will not vote for Hillary Clinton,” said Sanders. “But I would say that the vast majority of them… will come on board Secretary Clinton’s campaign.”

And many, like former Sanders delegate Kira Willig, have indeed come on board. Now that it’s been a couple of months since the conventions, she said she and her fellow Sanders supporters are doing they have to do.

“We’ve reeled back on our anti-Hillary sentiments,” she said, especially on social media, “but it doesn’t mean that we are going to be out in a field office, phone banking for her, donating money for her.”

Willig still plans to vote for Clinton, but, she said, “The sense of us who were people that contributed to Bernie is she doesn’t need our money, she has her sources, and our money is better used for… the down ballot candidates” in local and state elections. Willig said that’s where her political donations are going now.