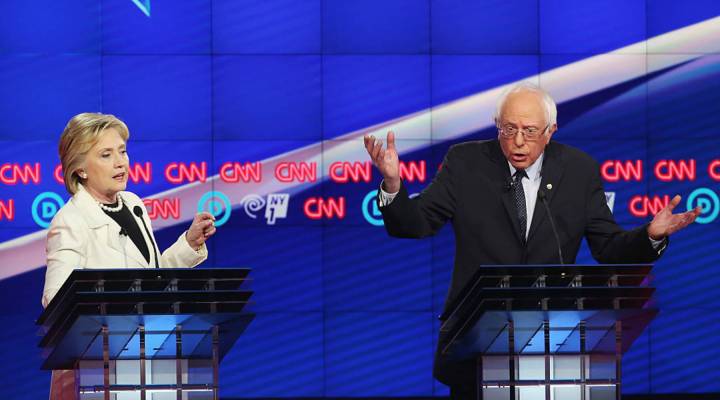 Bernie Sanders, the presidential candidate who built his campaign around opposition to the power of financial institutions, said he will finally release his taxes as early as Friday. The declaration came Thursday night at the latest Democratic debate, during a discussion on transparency. Rival candidate Hillary Clinton challenged Sanders, who has been Clinton to release the transcripts of her paid speeches to Wall Street companies, on his failure to release his tax documents. She said she would release her transcript if he would release his tax returns. Sanders agreed.

While we wait for Sanders to make good on his promise, let’s look at where all the other presidential candidates stand on sharing their tax returns.

Hillary Clinton: Clinton was the first of the remaining candidates to release her returns. In July, Clinton released eight years worth of tax returns, which showed she and her husband Bill Clinton earned $139 million between 2007 and 2014. They paid nearly $44 million in federal taxes.

Ted Cruz: Cruz released his filings, covering three years, in February. The documents, which provided limited details, showed that he and his wife Hedi had an adjusted gross income of more than $5 million from 2011 to 2014. They paid $1.5 million in federal taxes.

John Kasich: Kasich followed with his partial tax returns for a 7-year period in March. The filings show that he and his wife Karen earned over $5 million between 2008 and 2014. They paid more than $1.3 million in federal taxes.

Donald Trump: If Sanders releases his returns, Trump will be the last man standing. The Republican candidate has said he can’t release his taxes while he’s being audited. Trump’s net worth has been difficult to nail down, and his reluctance to release his returns adds to the secrecy around his fortune. Trump’s campaign said in July that he made $362 million in 2014, but the figure only accounts for his revenue and not his actual income.