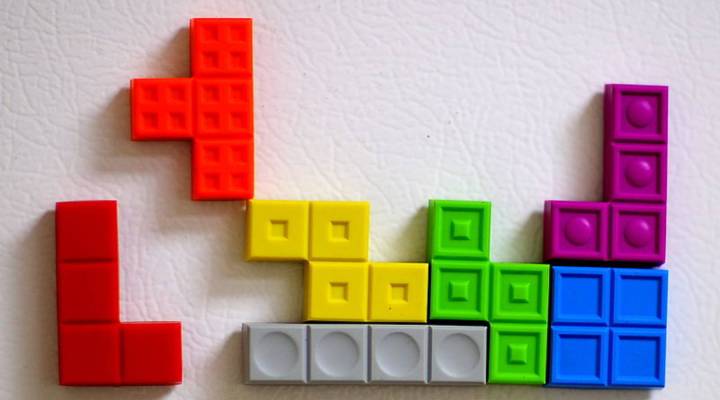 COPY
Tetris blocks are everywhere—you can see people playing the game across the world on smartphones, tablets and iPhones.  Tetris Opener/Wikimedia Commons

Tetris blocks are everywhere—you can see people playing the game across the world on smartphones, tablets and iPhones.  Tetris Opener/Wikimedia Commons
Listen Now

Alexey Pajitnov was a researcher and programmer at the Russian Academy of Sciences in the 1980s who liked to tinker and experiment. Using antiquated computers, his attempt to re-create a childhood game became the original code for the Tetris we know today. Now,  it’s everywhere—you can find people playing it across the world on smartphones, tablets and iPhones—but getting it out of the former USSR was no easy task.  We talked with author Dan Ackerman about his new book on the incredible story behind this simple puzzle game’s journey from obscurity to global cult status.

When did it first come to the attention of the Americans and Europeans?

Very unusually, the game sort of went viral, you couldn’t send it to anyone over the internet, there was no internet back then, especially not in Moscow, you had to ‘sneakernet it’ which is when you put something on an old fashioned floppy disk and you walk it over to somebody else and say ‘here ya go.’ And people kept doing that, they kept making copies and it when around Moscow and around other cities and eventually to other eastern block nations, ended up in Hungary, where a guy who was a software exporter from the U.K. saw some people playing it at a school and said ‘hey this actually looks pretty cool, I should see if I could find the rights somehow to get the software and to sell it in the West.’

On the race between Mirrorsoft and Nintendo to acquire the intellectual property rights to Tetris:

Mirrorsoft was part of a big group called the Mirror Group, which was a big media conglomerate headed by a guy named Robert Maxwell, who back in the 80’s was sort of the Rupert Murdoch of this day, the two of them were actually tabloid newspaper rivals and after a kind of a round about way of getting the program out of the Soviet Union said we don’t know how to ask the Russian’s about intellectual property rights, they’re not going to understand this, let’s just start making deals for it and roll the dice and see what happens.

And then Nintendo wanted to try to find it and put it on their top secret new project they were working on called the Game Boy, a little thing you might have heard of. So everyone had to race to Moscow, basically during the same week and try to track down the secretive Soviet trade group known as ELORG, which sort of sounds like a James Bond villain organization, that could technically sign the contract because they figured out that nobody else really good.