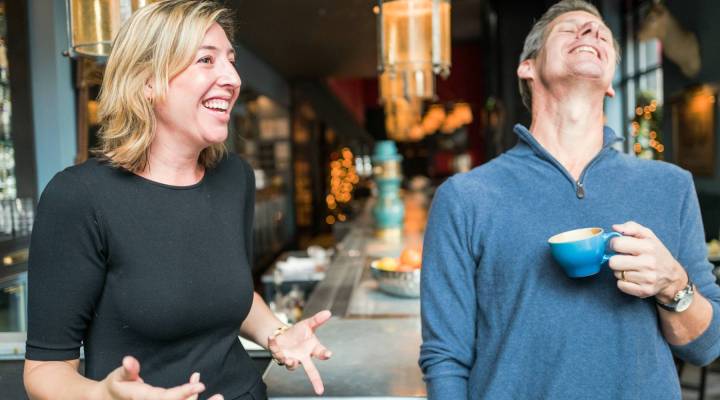 COPY
The hosts of "Make Me Smart" dish on regretful shoe purchases and life philosophies. Christopher Michel
Make Me Smart With Kai and Molly

No matter who you are, you’ve probably had a rough day at the office that changed your perspective, or maybe you made an impulse purchase you really, really wish you could take back. This week, Marketplace’s Kai Ryssdal and Molly Wood, the hosts of “Make Me Smart,” took our money-inspired personality questionnaire.

You can listen to “Make Me Smart” right here, or wherever you download your podcasts.

Molly Wood: I think I know the answer to this, but in next to life or maybe later in this one, what would your career be?

Kai Ryssdal: Oh, I would be a helicopter pilot in the Grand Canyon.

Wood: I did not know the answer to that. Nope, I thought I did, but I didn’t. Like for tourists?

Wood: Tell me more. Why is this your dream?

Wood: Oh, that’s why it has to be the next life.

Ryssdal: In my fantasy life. What is something you bought that you now regret buying?

Wood: I will tell you a story about a thing that I regretted buying that turned out to be great. Very shortly after I graduated from college, I had my first big-girl job and went into a shoe store, and they had this pair of Italian leather boots. Beautiful, I mean they look like chocolate gorgeousness. I spent $200 on them and for context my rent was $325. So it was not a good idea. I took them home and I was, like, this is not a good idea, this is really not a good idea.

I tried to take them back to the store, and she was like, “Honey, nobody returns $200 leather boots after you’ve worn them.”

Ryssdal: Oh, you wore them?

Ryssdal: Oh, yes. There you go.

Wood: Italian leather boots are no joke. I answered the opposite question, but I have never loved a regret purchased more. What is the hardest part about your job that no one knows about you, poor darling?

Ryssdal: Oh, man. There are so many ways to answer this question that could get me in to so much trouble. I got maybe two and a half. Number one is you can’t always say what you say you want. It’s tempting but you can’t. The other one, and this is going to be a big, fat “Boo hoo, cry me a river ,” but daily deadline journalism can be grinding sometimes, and sometimes that’s just no fun. Like at Marketplace, we go on the air 2 o’clock in L.A. and you see people going out at 12:15 to have lunch and [I’m just] like no I don’t get a lunch hour. So that’s kind of a drag, but honestly, there’s nothing I don’t like about my job.

Wood: I remember doing a daily podcast, and I would see those people standing in the halls talking, and I was like, “What the hell is wrong with you? Don’t you have somewhere to be?”

Ryssdal: Yeah, you getting a whole paycheck today pal, or what? What was your very first job?

Wood: I think the first time I actually ever got paid for, it was at a grocery store. I was a grocery store checker, and I loved bagging the bags, it was like Tetris. I still love it. I’m still that lady at Trader Joe’s who’s like, “Oh, I’ll bag it.”

Ryssdal: Somehow that doesn’t surprise me at all.

Wood: What is your most prized possession?

Ryssdal: I mean, a younger me would have said my car, but an older me drives a minivan. I have a picture of my dad, which is him not too terribly long before he died. [My parents] had retired to Florida, and dad was working in a hospital. He was, like, a candy striper except not really a candy striper because he was a 75-year-old man, and it’s just him looking straight at the camera, and it’s a nice little thing that I have. I guess that’s probably up there on the list. I mean, I’m not a possessions kind of guy, but that’s up there.

Wood: That’s a good one.

Ryssdal: What advice do you wish somebody had given you before you or as you were starting your career?

Wood: I wish that someone had said you don’t have to give everything to the company that you work for. That can be ambitious and you can do good work and you can try really, really hard, but you don’t marry them. It’s a company and it doesn’t love you back.

Ryssdal: That is so interesting, because my answer to that question is you got to play the hand you’re dealt, and if that means, you know, going balls out, then that means going balls out. But you have to remember that my first two careers were sort of non-voluntary, [or I mean] you didn’t have much choice once you were there. I spent eight years in the military and then four years in the State Department, and so the answer was when the bell rings you pick up the damn phone, you know?

Wood: Which is so fascinating, because, yeah, I apparently evolved in the total opposite direction, which is sometimes the bell will ring, and you will say, “You know what? No, this is my life and I’m going to live it.” That’s why I changed my mind about the Air Force Academy early.

Ryssdal: There you go. And you know what? You had a better time in those eight years.