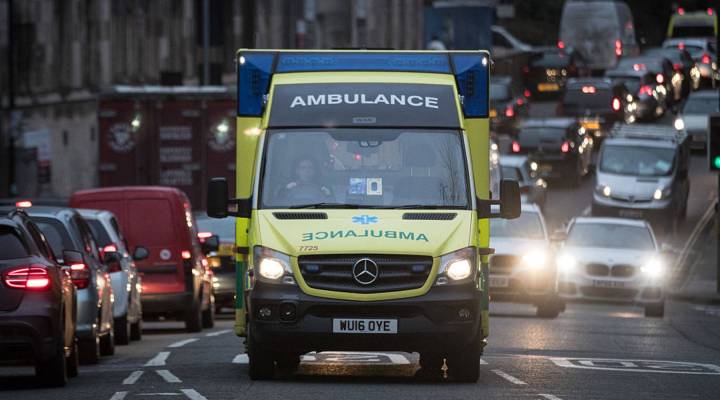 COPY
An ambulance arrives at the Accident and Emergency department of the Bristol Royal Infirmary in Bristol, England. Matt Cardy / Getty Images

An ambulance arrives at the Accident and Emergency department of the Bristol Royal Infirmary in Bristol, England. Matt Cardy / Getty Images
Listen Now

While the U.S. holds its breath on the fate of the Affordable Care Act, it’s easy to forget that there are lots of other health care systems out there in the world. What would it be like to get a chance to try on a different health care system for a bit, like a new pair of shoes?

That’s sort of what happened for Liz Noli, who currently lives in the U.K. with her British husband. Noli was born in the U.S., where she worked as a contractor for an insurance agency. Her job was to post customer testimonials on social media, and she was struck by how many people were simply confused by the levels of administration in our health care system.

When Noli got the chance to move to the U.K. with her husband, the coverage under the National Health Service wasn’t a primary reason, but it definitely wasn’t a bad thing, either. Noli was shocked at how easy it was to use the NHS: You just had to register and then show up to see your doctor. Because the services were paid through taxes, you never had to worry about billing. You could just visit your primary care physician, then leave.

“I still have this sense of like, I’m shoplifting or something when I’m leaving,” Noli said. “But it’s fine. You don’t have to pay anyone.”

While it’s pretty implausible for the U.S. to simply lift another country’s health care system and adopt it as our own, that got us thinking: What if we could take parts of different health care systems and fit them into ours, like policy Tetris pieces? Marketplace Weekend host Lizzie O’Leary sat down with Robin Osborn, vice president and director of International Program in Health Policy and Practice Innovations at The Commonwealth Fund in New York City. Osborn and her team produce annual surveys that compare different health care policies in 11 countries, and she suggested we look at these systems for guidance.

While there parts of the National Health Service are criticized (such as long wait times to see particular specialists), the billing process is pretty simple when compared to the U.S. And that makes the NHS a little bit easier to use.

For Osborn, the way that the French health care system handles primary care is really interesting and could be a great model for the U.S., where preventative care tends to be underutilized.

“France has some cost sharing and co-pays. They’re not major. They’re relatively minor,” said Osborn, referring to the way primary care insurance is structured in France.

“But if you have any one of 30 chronic conditions, you have no cost sharing for both the primary care visit and for the prescription drugs. So the whole incentive is to encourage people who have diabetes, who have congestive heart failure, to make sure that they get the care they need.”

Basically, according to Osborn, the approach in France is: if you’re really, really sick, we’re going to do what we can to get you to a doctor. Not keep you out.

Dutch health care shares a lot of similarities with Obamacare — in theory, at least. It’s also a private insurance market that Dutch citizens are mandated to buy into. Unsurprisingly, there are lots of features that would be really great to import into our own system. But for Osborn, one of the more interesting parts of the Dutch health care is that general practitioners routinely make house calls, and that is really important to elderly patients.

“For someone who is frail and elderly, they don’t end up in the emergency room. Which is really not a good place for them,” Osborn said. “The GP comes to their house and is able to, in most cases, take care of them at home and monitor them and avoid that emergency room visit, which also may mean avoiding a hospital admission.”

These are just a few examples, but there are plenty of other health care systems out there. Are there some that you think have really interesting ideas? Maybe a policy in Germany, India or Mexico? Let us know what you think in the comments!