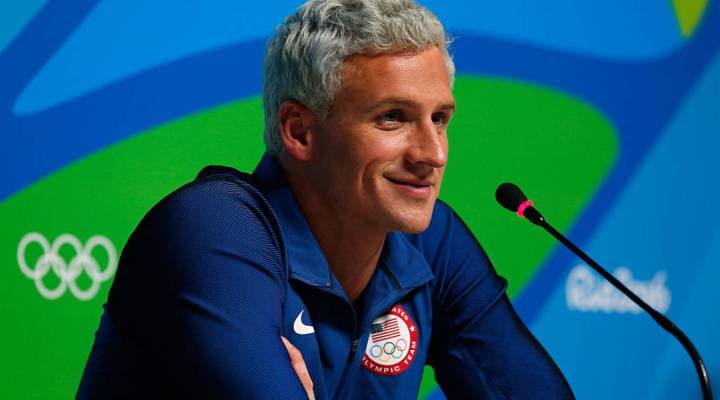 COPY
Ryan Lochte of the United States attends a press conference in the Main Press Center on Day 7 of the Rio Olympics on August 12, 2016 in Rio de Janeiro, Brazil.  Matt Hazlett/Getty Images

Ryan Lochte of the United States attends a press conference in the Main Press Center on Day 7 of the Rio Olympics on August 12, 2016 in Rio de Janeiro, Brazil.  Matt Hazlett/Getty Images
Listen Now

Update: According to the Associated Press, authorities in Rio are charging Lochte with making a false robbery report.

Ryan Lochte lost all his big sponsorship deals after his idiocy down in Brazil during the Olympics. Today, you might say he’s failing upward, or something.

Speedo, Polo Ralph Lauren and others dropped him like a hot potato after his story of being robbed at gunpoint was thrown into question by Brazilian authorities. After reviewing surveillance video and speaking with witnesses, police said the group had actually vandalized a gas station. Lochte has been on what you might call an apology tour, giving interviews and admitting  his story was “over-exaggerated.”

But today, Pine Brothers cough drops signed him up, saying “Just as Pine Bros. is forgiving to your throat, the company asks the public for a little forgiveness for an American swimming legend.”

Cheesy and opportunistic all at once.

Thanks to all the folks at pine bros. for your confidence in me. I look forward to making you proud.

In other Lochte Redemption news, the 12-time medalist will reportedly be on “Dancing with the Stars” this season. The casting hasn’t been officially announced, but USA Today reported the deal was in the works before Rio.

Even so, the timing is uncanny because “Dancing with the Stars” has a history of helping celebrities get back in the public’s good graces. The Atlantic notes Paula Deen, Tom DeLay, Bristol Palin and more have enjoyed good PR from the show.

We have a feeling somewhere Lochte is letting out a quiet “jeah.”