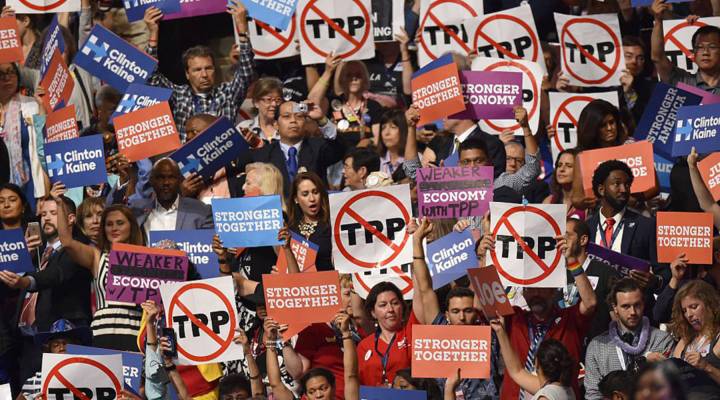 COPY
With Hillary Clinton and Donald Trump both opposing the TPP in its present form, the pact has become a political football in this election season. NICHOLAS KAMM/AFP/Getty Images

With Hillary Clinton and Donald Trump both opposing the TPP in its present form, the pact has become a political football in this election season. NICHOLAS KAMM/AFP/Getty Images
Listen Now

Trade deals are rarely popular in election years but this year they seem to be extra unpopular.  Mr. Trump appears opposed to most of the U.S. trade deals up to this point and both he and Secretary Clinton oppose the Trans Pacific Partnership.  That complicates the efforts to get the thing passed, even as President Obama has said he would make a push for the deal after the election.

“It’s really dialed up the pressure to pass the thing in the lame duck session,” said Jared Bernstein, senior fellow at the Center on Budget and Policy Priorities.  “So I think what they’re doing is plying a lot of backdoor channels to try to get legislators to support them once the election’s over,” he said.

Agricultural producers are pushing representatives of rural areas hard in favor of passage. Dale Moore, executive director for public policy at the American Farm Bureau Federation said some Americans have a lot to gain from the TPP, and he’s making that as clear as possible to lawmakers.

“When its fully implemented , we’re looking at an increase of cash receipts for farmers and ranchers of nearly $8.5 billion annually, we’re seeing about $5.3 billion increase in net exports for agriculture,”  he said.

Even so, the political atmosphere isn’t helping the case.

“The persistent rhetoric, the fact there’s no support at the top of either ticket, has made it very difficult for senators who are up for reelection to embrace the TPP,” said Dan Ikenson with the Cato Institute.

Republicans who would be president Obama’s allies on the TPP have been turned off, said Ikenson, by concessions the president made in TPP negotiations to attract some democrats.  President Obama reduced certain protections for tobacco, pharma, and finance industries.

“He didn’t win any democratic support at all from that move and he lost a lot of republican support, it backfired,” said Ikenson.

Both Ikenson and Bernstein – on opposite sides of the TPP debate —  said they believe arguments for passage may now increasingly emphasize the geopolitics of the deal.

“This is the idea that if we don’t make the rules then China will, and will dominate Asian markets,” said Bernstein.

Just how compelling this and other arguments prove to be will be determined most likely sometime between election day and the end of the year.