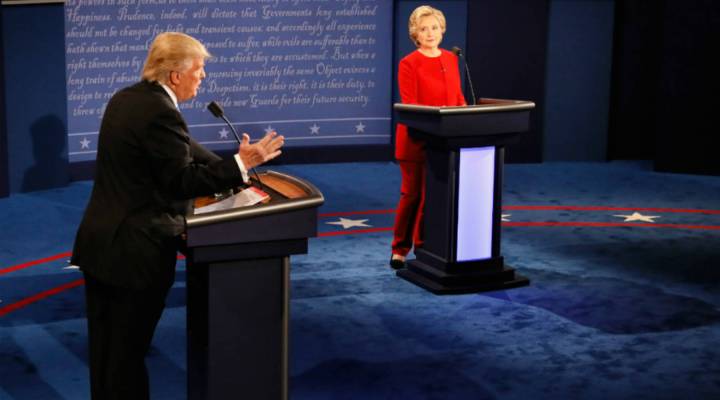 One of the many testy exchanges of the first 2016 presidential debate came on the topic of trade. Republican nominee Donald Trump accused his Democratic opponent, Hillary Clinton, of supporting the Trans-Pacific Partnership, the massive trade deal covering a dozen Pacific Rim countries.

Clinton has distanced herself from the deal throughout this campaign, and did so again last night.

Both candidates had some truth in their statements. Clinton did indeed call the TPP the “gold standard” of trade deals in her book, but that was before the details of the deal were negotiated.

Since the details of the negotiated agreement were released publicly, Clinton (with some nudging from her former democratic opponent Bernie Sanders) has said she’s opposed to it, and that she won’t change that position once elected.

On Monday night, Clinton also defended her record on other trade deals:

When I was in the Senate, I had a number of trade deals that came before me. And I held them all to the same test. Will they create jobs in America? Will they raise incomes in America? And are they good for our national security? Some of them I voted for. The biggest one, a multinational one known as CAFTA, I voted against.

CAFTA was one of two trade deals Clinton voted against during her time as a Senator from New York.

As a senator from New York, Clinton had the opportunity to vote on 10 trade deals. She said yes to six and no to the Dominican Republic-Central America Free Trade Agreement (DR-CAFTA) and the deal with Andean countries. She skipped the votes on agreements with Jordan and Peru, which came up when she was running for president the first time, but supported both deals.

At the time of the CAFTA vote in 2005, Clinton said CAFTA didn’t include adequate labor standards, and called it a “step backward”.

Her point on Monday night, however, that she is someone who weighs each trade deal carefully, may have been lost to much of the estimated record audience, since she did not elaborate on the acronym of a trade deal that isn’t prominent in recent discussions on the topic.