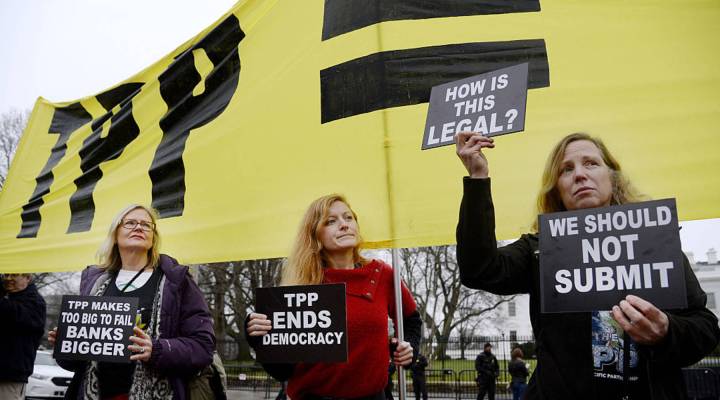 Activists hold a rally to protest the Trans-Pacific Partnership in front of the White house on Feb. 3 in Washington, DC. Olivier Douliery/Getty Images

Activists hold a rally to protest the Trans-Pacific Partnership in front of the White house on Feb. 3 in Washington, DC. Olivier Douliery/Getty Images

Donald Trump’s arguments about trade during last night’s presidential debate brought up Hillary Clinton’s past positions on controversial trade agreements, and spoke to a concern among voters: the loss of jobs due to trade policy.

This notion is a common refrain for the manufacturing industry, and the issue has created division within the Democratic Party. One major policy that has drawn controversy is the Trans-Pacific Partnership, or TPP, a pending trade agreement made up of 12 countries, including the U.S., which collectively cover 40 percent of the global economy.

“You called it the ‘gold standard,'” Trump said to Clinton about her previous support of the TTP. Clinton did call the TPP the “gold standard” of trade deals, but that was before the details of the deal were negotiated. She later revised her stance on the policy, which has been a tough sell for President Barack Obama and other politicians — something the Democrats recognized in their platform.

But the policy’s implications go beyond this year’s election fodder. Here’s what some folks had to say about the TPP when we talked to them about it:

“I would have to agree with Trump — free trade is one thing but fair trade is something different,” Slater said. “And free trade has really hurt us in terms of the wheat industry and the cattle industry. I think if we could get to fair trade, it’ll really help. Because the basis of our whole economy is our ag industry — mining, lumber, agriculture, cattle, wheat. If it doesn’t do well, then the economy doesn’t do well.”

Andrew Spiro, delegate at the DNC, spoke to our Politics Inside Out team during the convention about his thoughts on trade.

“I’ve heard [the TPP] described as NAFTA on steroids. I’m not against all trade, trade is just a part of life in the modern world, but it should be fair trade, we shouldn’t be shipping jobs — American jobs — overseas to places like Bangladesh where they make 30 cents an hour. We should help bring them up to American labor standards.”

Marketplace’s Tracey Samuelson shadowed U.S. Trade Representative Michael Froman on his campaign around the country to build support for the agreement.

“I think we’re out here making the case for TPP and making sure that its not just one side of the argument that is articulated, that people see what’s actually in the agreement, how it benefits them and how it deals with issues they care about … we’re not going to be able to change everybody’s mind.”