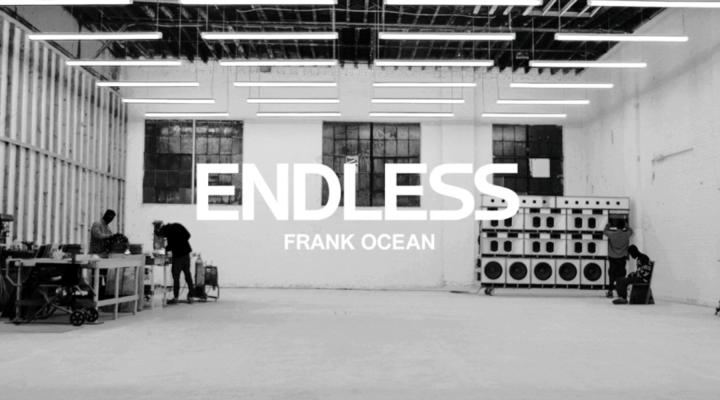 If you haven’t been waiting for Frank Ocean’s first new album in four years, you probably know someone who has. Or maybe you found out about the whole thing when your Twitter blew itself up last night over Ocean’s new 45-minute-long “video album.” It’s called “Endless” and is available, at least now, only on Apple Music.

Ocean’s taking a page from Beyonce, who did the same thing with “Lemonade,” which debuted on HBO and then was released exclusively on the streaming service Tidal. That’s the one co-owned by her husband, Jay Z.

Ocean’s video is far simpler than Beyonce’s 11-part production. “Endless” — shot in black and white — shows Ocean slowly building a staircase. Whether videos like these are simple or complex, “certainly money is being made on them,” said Larry Miller, professor of music business at New York University.

“In general, those productions are being funded by advances from one or another media platform on which that artist is offering an exclusive window of release.”

This year, it’s often been streaming services laying down money or making the deal.

Apple Music and Tidal, for example, don’t have free versions like Spotify does, so exclusives “are a way to differentiate their services from the competition,” Miller said.

As much as epic music videos are about artistic vision, they’re also about the current state of the music industry. While they’re exclusive, videos and albums attract subscribers. If and when they hit the internet, they attract viewers, who attract advertisers, who spend money.

“Once upon a time, videos didn’t generate any revenue at all and they were seen purely as promotional,” said Serona Elton, associate professor of music business at the University of Miami.

“But now I think any company that spends any money on making any kind of music video content views it as something they intend to make revenue back from very directly,” she said. Though how much money is often a mystery and, unlike movies at the box office, such metrics are kept secret.

Also, music videos don’t have to cost a lot to make. “Endless,” which Ocean directed himself, is him in a warehouse.