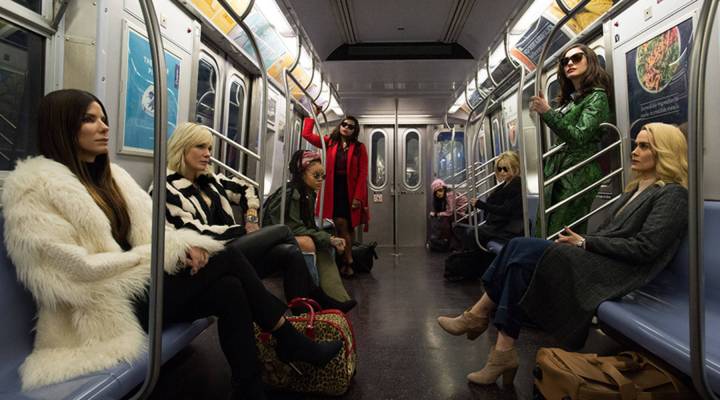 Olivia Milch is the co-writer of “Ocean’s 8” and a producer on the film, the latest in the “Ocean’s” series, which features an all-women, all star cast.

Marketplace Weekend host Lizzie O’Leary sat down with Milch to discuss feminism and ask why the woman-driven movie had to be a part of a franchise, and not an original. The following is an edited transcript of their conversation.

Olivia Milch: The hope is that we get to a place where there’s just a lot of movies being made with female protagonists and female voices. And it’s always comforting I think to have known entities. I think we as audiences and as consumers of art and of media there is something about that as an entry point.

Lizzie O’Leary: Well, and Hollywood as a business — I mean — this sort of reboot and sequel business has been big lately.

O’Leary: Do you think about box office and your creative process?

Milch: I’m very new to that element of things. I don’t. To me that all kind of seems like Monopoly money, I mean, I would imagine perhaps after this experience, I will have more of an intimate and personal understanding of that — knock on wood — but I was really fortunate to grow up around storytellers that didn’t think about commercial viability and commercial success. That wasn’t something that was ingrained —

O’Leary: — Your father is David Milch, creator of “Deadwood,” among other things —

Milch: (Laughs) That guy. I think, you know, there doesn’t have to be that tension between commercial success or commercial viability and great art. And I think some of the best pieces of work that have come out of film, live in the middle of that Venn diagram.

O’Leary: You also made this movie “Dude” for Netflix and I want to ask you about something you said on a panel: that running a set doesn’t have to be fear-based. Tell me about that, because obviously in this cultural moment we’re talking about bullying, we’re talking about sexism and harassment, and a lot of the meanness that is endemic I guess to both of our industries. How do you run a set that’s not fear-based?

Milch: The best version of a set is a community, and to be the writer or the director on that set – you really want to make sure that everybody knows why they’re there and what story that they’re telling. And I think we have this idea of sets and of directors, where you know, people are yelling and throwing things and it’s crazy but ‘oh that’s where the vision comes from’ and that very well may be true but that’s not who I am and that’s not what I would want to be a part of necessarily.

O’Leary: So there’s this thing that is also happening now that I think of sort of as a corporate feminism, and I’m curious whether when you see this big shiny movie with your name on it, is it enough to say look it’s the badass women headlining the movie? Do we get to a cultural point where maybe we miss the work?

Milch: I’m always going to be happy when people are talking about feminism — if it’s a corporation or you know the young woman on the street corner selling lemonade. I mean I’ll take it. I think one potential antidote to the fear that it’s being co-opted in some kind of way or the work is being missed is, to look at the people who’ve been doing the work for a long time and I think that tends to be women of color and the queer community and people who have been at the forefront of these fights for rights. So that’s the time when you kind of try to — how do I serve those voices? How do I give those voices a platform, how do I hold the door open for those people when I’ve been fortunate enough to get into position where we’re getting to tell the story on a really big platform and really big scale. I think that’s one of the incredible things about our cast and our crew, is that they’ve been really aware of how potent and powerful representation is in it of itself.

O’Leary: When you created “Dude,” tell me if I’m right here, 50 percent people of color in the cast 50 percent women on the crew.

Milch: That was our intention. And I think that when you get a little bit of control, a little bit of power, you want to put your money where your mouth — is you want to try to live your values. Also because you know that it will make the work better. You know, “Dude” is a better movie because it looks like the real world.

O’Leary: I mean, I walked out of “Ocean’s 8” ready to go commit some robberies.

O’Leary: I am curious, how do you want people to walk out of this movie and feel?

Milch: Empowered. Delighted. Open to the possibilities of joy and fun. This is really just a story about women who are excellent at their jobs, they just happen to be criminals. And I do think that there is something about what women are and aren’t allowed to do when we’re talking about filmmaking and storytelling. Women have kind of been left out of the ability to be in a movie that’s sort of about fun and fantasy. And they don’t necessarily need the deep, dark, painful, crazy past to justify why they’re doing something. Sometimes women just want to steal ****. And sometimes they want to do it with a group of other badass women and make a lot of money and treat each other well and support each other in the process. There’s a lot of fun to be had in this experience.