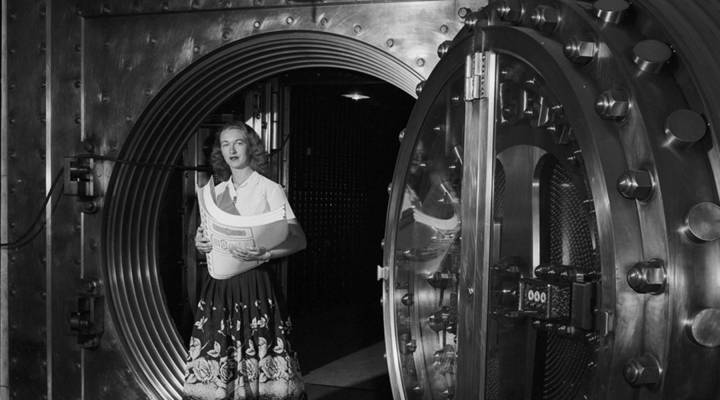 COPY
An office worker, circa 1955, fetches bond certificates from the vault of the Toronto General Trusts Corp., which is secured by a massive fifteen ton door. Evans/Three Lions/Getty Images

An office worker, circa 1955, fetches bond certificates from the vault of the Toronto General Trusts Corp., which is secured by a massive fifteen ton door. Evans/Three Lions/Getty Images
Listen Now

“Ocean’s 8” hits theaters June 8, and Sandra Bullock’s gang of women criminals may be fictional, but there are some real life women who ran big heists. In the 1920s, the infamous Bonnie Parker of Bonnie and Clyde hit the scene.

Other notorious thieves have made their mark: Ma Barker, who led the bank-robbing Barker Gang, and a string of more recent criminals — the Starlet Bandit, the Church Lady Bandit, the Barbie Bandits.

N/B Picture taken in the early 30s (between 1932 and 1934) of notorious robbery partners Bonnie Parker (R) and W.D. Jones, well know as part of Bonnie and Clyde, who robbed and murdered in the United States during two years until they were shot dead at a police road-block in Louisiana in 1934.

Marketplace Weekend spoke to Kristy Holtfreter, professor of criminology at Arizona State University and editor of the journal Feminist Criminology, about the reality and psychology behind the real women who heist. Here’s what you need to know:

During the late 19th century, there was a significant rise in women shoplifting and committing robberies in Europe. In the 1920s, some of the first big women heisters hit the scene in the United States. Many criminologists attribute the uptick in crime to the women’s movement in general — women had more opportunities and responsibilities outside the home, legitimate and, well, illegal.

While there were some groups of female shoplifters and a couple infamous husband-and-wife teams, the “Ocean’s 8” style gang of specialists is rare — and not just in the sense that it’s a movie and it’s fiction, but also in the sense that women tend not to commit crimes together. Women are more likely then men to offend alone or with a romantic partner. Men tend to commit robberies in groups of other men.

3. Gender has some influence on motivation.

Yes, both men and women commit robberies out of greed or to enrich their lifestyle. But there are some differences in the motivation behind a robbery, too. Holtfreter notes that men will often commit robberies to resolve a personal problem — some kind of debt or financial problem. Women are more likely to commit a robbery to help others, especially a partner or a child.

4. But that doesn’t mean women are angels or Robin Hoods.

There are definitely instances where women match their male peers — the women who do commit robberies are just as likely to be the ones holding a gun or pulling the trigger.

According to the FBI, about 7 percent of bank robberies in 2016 were committed by women. That number is up slightly, but it’s still in line with an overall crime gap, which Holtfreter says exists across nearly all classifications of crime.