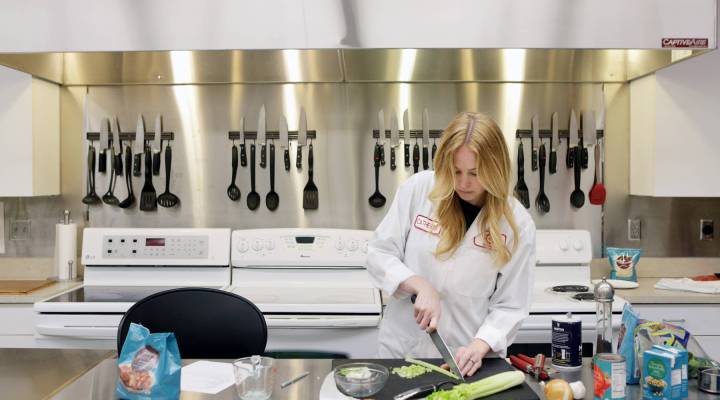 COPY
Target culinary development scientist Catherine Potter experiments with a recipe that will go on the back of a package of meatballs under the store’s Simply Balanced brand. Target has been investing more energy in its in-house brands as it seeks to boost grocery sales. Jeff Thompson/Marketplace

Target culinary development scientist Catherine Potter experiments with a recipe that will go on the back of a package of meatballs under the store’s Simply Balanced brand. Target has been investing more energy in its in-house brands as it seeks to boost grocery sales. Jeff Thompson/Marketplace
Listen Now

Grocery at Target is a $20 billion business. But it doesn’t drive a lot of traffic. Those who buy groceries at Target stores usually have come to purchase something else.

“Today they shop for food while they’re at Target, and we want them to think of us more at the forefront of their minds,” said Amanda Irish, vice president of Owned Brand Food and Essentials for Target.

They provide a kind of value ladder, with some of the least expensive items housed in Market Pantry, and the more expensive “wellness” items found under Simply Balanced.

Irish said her team is trying to offer private-label products that are special — not just knock-offs of the name brands. Some of the more novel products include spicy maple bourbon pickles or spicy Bloody Mary trail mix.

“We want to make sure we reflect some of the coolest emerging things that are happening in food in the country,” Irish said.

In the test kitchens at Target’s headquarters, food scientists develop ideas for the private-label products and conduct quality checks of finished items.

On a recent morning, Lindsey Small, a product development scientist, sliced open an Archer Farms pint of ice cream. She wanted to make sure the supplier produced it to Target’s specs, which were shaped by consumer feedback.

“We did concept testing where we actually tested with external guests and said, ‘Which of these would you prefer to buy?’” Small said. “And this very indulgent, pint-sized ice cream was something they were really interested in.”

A product development scientist at Target assesses ice cream from one of the retailer’s in-house brands to make sure the supplier produced it according to Target’s specs.

Kantar Retail analyst Amy Koo said other big retailers, like Trader Joe’s and Costco, have had great success with their in-house brands, which some people may even prefer to name brands.

But Koo said Target does take a risk in displacing some of the more familiar products from big manufacturers with its own.

“Do guests actually want that?” Koo asked. “Well, I guess this is going to be an experiment.”

“There are only two grams of sugar. That’s excellent,” she said. “Sodium? Zero. Perfect.”

Emily Olson, a senior product development scientist at Target, does some quality checks of coffee in the retailer’s Archer Farms line.

Mueller said the product meets her nutrition standards and is appealing to her grandchildren. Plus, the price is right: It falls right in between a cheaper, non-organic pasta and a pricier, name-brand one.

But shopper Christine Johnson seemed only vaguely familiar with Simply Balanced, even though its low-priced organics are the kind of thing she’s after. “Simply Balanced?” she asked. “Which one is that?”

At this point, Simply Balanced is the fastest growing private-label brand and is where Target plans to invest the most energy, with products like organic meat, eggs and salsa.

“The customer that is in Target over-indexes to this ‘better for you’ food trend,” said Piper Jaffray analyst Sean Naughton.

As Target puts more emphasis on its Owned brands, they might become harder to miss.