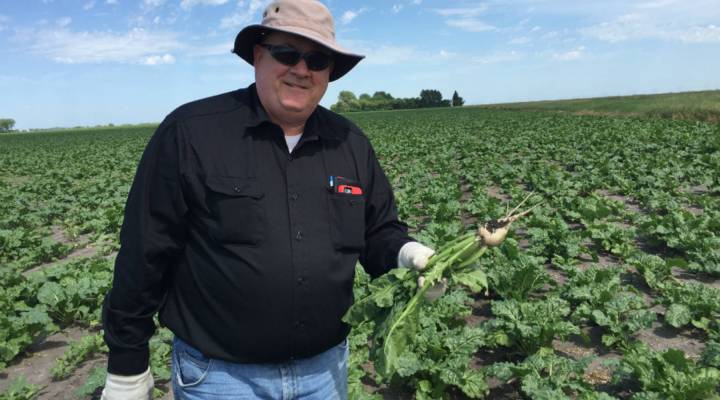 COPY
Farmer Bill Hejl in Amenia, North Dakota says switching to genetically modified sugar beets has lowered his overall herbicide use and his carbon footprint, as he has to run machinery over his fields less often to manage weeds. Annie Baxter/Marketplace

Farmer Bill Hejl in Amenia, North Dakota says switching to genetically modified sugar beets has lowered his overall herbicide use and his carbon footprint, as he has to run machinery over his fields less often to manage weeds. Annie Baxter/Marketplace
Listen Now

Farmers have been growing genetically modified crops like corn and soybeans for several decades. But some consumers remain wary of GMOs, including when it comes to sugar.

A few big food manufacturers, including Hershey’s, are now saying they will use non-GMO cane sugar instead of beet sugar in products. The moves come as firms await the specifics of a new law requiring that they make clear the presence of genetically modified ingredients.

Congress recently passed a compromise bill giving firms a host of options as to how they would do so, with options including a barcode that consumers would scan. President Barack Obama signed the bill into law last week.

Meanwhile, sugar beet growers don’t understand why some consumers object to how they farm.

“We’re using less herbicide and a lot less diesel fuel,” said farmer Bill Hejl in Amenia, North Dakota. “That means profit for my farm, but it also cuts down my carbon footprint.”

Nearly a decade ago, Hejl started using seeds engineered to resist the herbicide Roundup. He’ll never forget a conversation he had back then. It was around harvest time, and he was chatting with a fellow farmer in the Red River Valley where they live. It’s a hot spot for sugar beet production.

“He said, ‘So Bill, how do you like Roundup sugar beets?’ His name was Dave,” Hejl recalled. “I said ‘I’ll tell you, today is the second time I’ve been in this field in a tractor this year.’ And Dave said, ‘Ohhhh,’ just like that.”

Hejl said Roundup doesn’t beat up the sugar beets as much as the old herbicides did, so their leaves grow a canopy faster, which prevents further weed growth. Roundup also takes out big weeds the old herbicides couldn’t tackle. It all means less time and resources spent managing weeds.

Scientists say GMOs are safe, but some consumers think they need more testing.

It’s unclear how much of an advantage that’s handing to growers of sugar cane, which is not genetically modified. The ag co-op American Crystal Sugar said so far beet sugar sales aren’t affected, but the co-op is nevertheless exploring what it would take to return to conventional sugar beets that aren’t genetically modified.

Doing so could be challenging, as it might be difficult to get enough of a supply of conventional seeds, along with the old herbicides.

However, the bigger barrier could be getting everyone in the co-op to agree they should sell non-GM sugar beets.

“Either everyone is in or everybody’s out,” said Dan Younggren, a sugar beet farmer in Hallock, Minn. “And I know everyone wants to stay in where we’re at.”