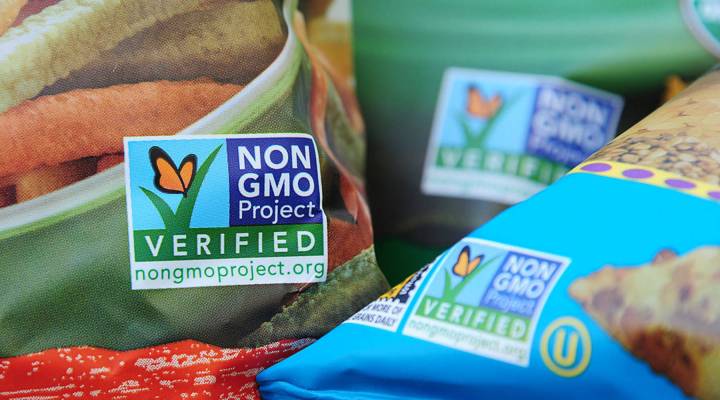 Grocery market shelves are about to look a lot different in Vermont beginning Friday because of a new state law that requires all food labels there to say whether products contain genetically modified ingredients. It’s been the source of fights within the industry, including a last-minute effort to supersede Vermont’s law with a national one that would make GMO disclosures through codes on labels that are readable by smartphones.

With the state law set to take effect, however, producers have had to prepare strategies for selling in Vermont. Some major companies such as Campbell’s have already said they would adhere to the new requirement.

“We also have member companies that are reformulating their ingredients to use non-GMO ingredients or organic ingredients to try and avoid that label,” said Michael Gruber, vice president of federal affairs at the Grocery Manufacturers Association.

“Some companies that have a better control of their supply chain are actually going to prevent some of those products from actually making it into the Vermont market,” he added.

The Grocery Manufacturers Association is part of a larger coalition opposed to Vermont’s law.

“That label is designed to be misleading to consumers, and in turn, try and force our companies to reformulate into non-GMO or organic ingredients, which is very expensive,” Gruber said.

Others, however, said the presence of such a label would primarily serve to give consumers more information.

“Labels are not going to serve as skull and bones or warning labels for individuals,” said Jane Kolodinsky, director of the Center for Rural Studies Food Systems Research Collaborative at the University of Vermont.

Kolodinsky has researched the effects of such labels on Vermont shoppers. She said one key finding of many such studies is that GMO-labeled foods need to be priced lower than their counterparts.

“In the end, we’ll probably end up where the marketplace wants to be,” she said. “If we say that consumer demand determines what’s supplied in the market, then consumers need the information in order to really create the balance that should be in there anyway.”

Jayson Lusk, a professor of food economics at Oklahoma State University, said things like a well-known brand can help offset the negative effect of a GMO label.

“It does depend whether consumers are looking for it and whether it appears on products that might have other characteristics, like a brand name or other attributes that they care more about than the genetic engineering label,” Lusk said.

He said it’s too early to tell how the new labels will affect consumer behavior in Vermont. At the same time, however, he said the new law is reaching far beyond the state’s borders, since few producers are able to create products solely for Vermont.

“It’s not economical for them to make changes only for Vermont, so we have a small state that’s going to impact food labels all across the country,” Lusk said.

Gruber, of the Grocery Manufacturers Association, said though the Vermont law is taking effect, he hopes it won’t be for long now that senators from both sides of the aisle have penned a compromise bill for a national labeling law.

“It’s our hope that we can get this out of the House and Senate and down to the president’s desk before the end of July,” Gruber said.