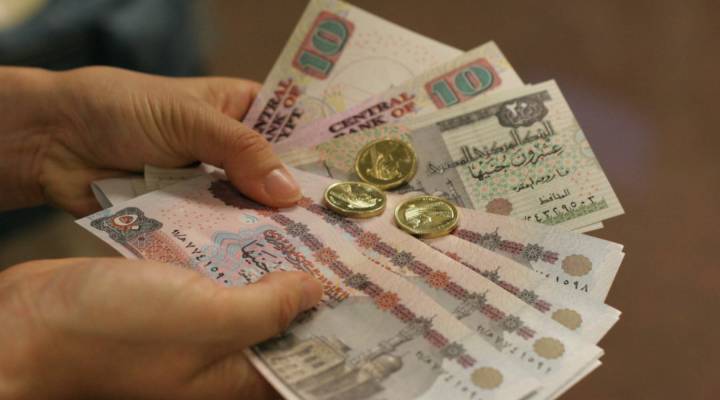 COPY
The Egyptian government is hoping an IMF loan will help stabilize its currency. emi moriya/Flickr

A team from the International Monetary Fund is expected in Egypt in the coming days to finalize a multi-billion-dollar IMF loan.

Since the 2011 revolution that toppled then-President Hosni Mubarak, Egypt has been racked by political and economic turmoil. Tourism is down, foreign investment is minimal, and an expansion of the Suez Canal hasn’t brought the expected revenue.

Steven Cook, senior fellow at the Council on Foreign Relations, said all of this is coming together to put tremendous pressure on the Egyptians to figure out a solution.

“And then add to that, oil prices are down considerably from their peak, and the Saudis and the Emiratis, who have been the primary patrons, just don’t have the cash to keep the Egyptians afloat,” he said.

Another major issue is the Egyptian currency. Officially, the exchange rate is between eight and nine Egyptian pounds to the dollar. On the black market, that rate is closer to 13.

Meg Lundsager, Wilson Center fellow and former U.S. executive director at the IMF, said the Egyptian government knows it needs to let the exchange rate move up, but it’s reluctant.

“Because then the cost of imports will go up,” she said. “And so if it hits consumers, that will be very sensitive as well.”

She said Egypt will likely have to show that its already implemented demands made by the IMF before it actually gets any money.