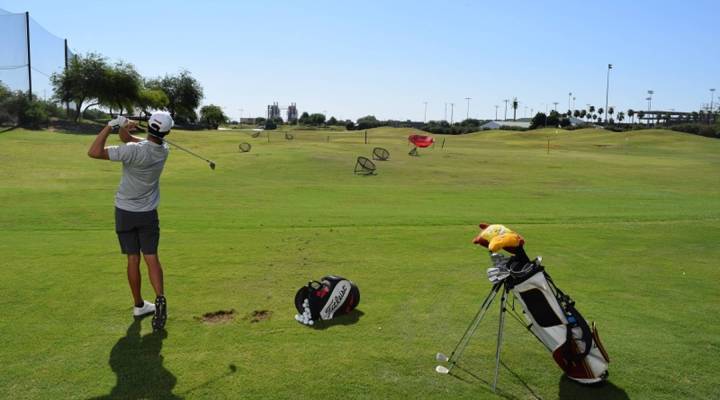 COPY
Sophomore Arizona State University golfer Jino Sohn practices for his upcoming season. Growing up he dreamed about winning major championships, but never thought he could aspire to golf in the Olympics. Jimmy Jenkins

Sophomore Arizona State University golfer Jino Sohn practices for his upcoming season. Growing up he dreamed about winning major championships, but never thought he could aspire to golf in the Olympics. Jimmy Jenkins
Listen Now

At the Arizona State University practice range, Sophomore golfer Jino Sohn is working on his irons. “I’m just trying to keep it simple,” Sohn said. “You know making sure everything is on plane and that I’m not coming too far from the inside.”

Sohn started golfing when he was eight years old. Growing up, he dreamed about competing at the highest level of the game “Major Championships, The Masters, US Open, PGA Championship,” Sohn said of the tournaments he hope to play in.

While he fantasized about putting on the green jacket, he never envisioned himself standing on an Olympic podium. That’s because golf has been absent from the Olympics for more than a hundred years. But that drought comes to an end this year in Rio.

Next month golf is coming back to the Olympic Games for the first time since 1904. But despite the triumphant return, many big-name golfers have decided to keep their clubs in the bag. Several big names have dropped out citing Zika concerns, but factors like money and prestige may also be in play.

Ty Votaw is the Vice President of the International Golf Federation. He led an effort to successfully lobby the International Olympic Committee for golf’s return back in 2009.
“The primary reason we thought it would be beneficial for our game was that it would grow the sport around the world,” Votaw said. “Both on a participation level and on a fan level.”

They had help making their case from some of the biggest names in the game at the time. “We were fortunate to have players like Tiger Woods, Phil Mickelson to participate in our presentations,” Votaw said.

But recently, Olympic support among golf’s superstars has been  flagging. Rory McIlroy made his feelings pretty clear in a recent press conference.
“You know I didn’t get into golf to grow the game. I got into golf to win,” McIlroy said about his decision skip the Rio Olympics.  He’s one of five of the top 10 golfers in the world that have dropped out.

Rio comes at an inconvenient time in a full summer schedule. Joel Schuchmann with the PGA says the few remaining tournaments are the last chance for golfers to qualify to play on tour next year.  “It’s a delicate balance. We have a money list,” Schuchmann said. “We don’t have guaranteed contracts so for these guys to keep their playing status for the following year have to make a certain amount of money.”

Golfers have stay in the top 125 in the rankings or receive a special exemption to play in tour events. Schuchmann says the earnings from one win can mean the difference between players keeping their tour card or looking for a new job.

So while a strong showing in Rio might be good for the game, it won’t do anything for the players’ standings on tour.

Despite the loss of some star power this year, golf advocates negotiated a place in the Olympics through at least the 2020 games in Tokyo. Ty Votaw with the IGF thinks it was the right play. “The results that we’re seeing here in the short term I think will ultimately result in a long term growth trajectory for our sport,” he said. But Votaw concedes it may take awhile before players and fans decide that Olympic golf is truly up to par.