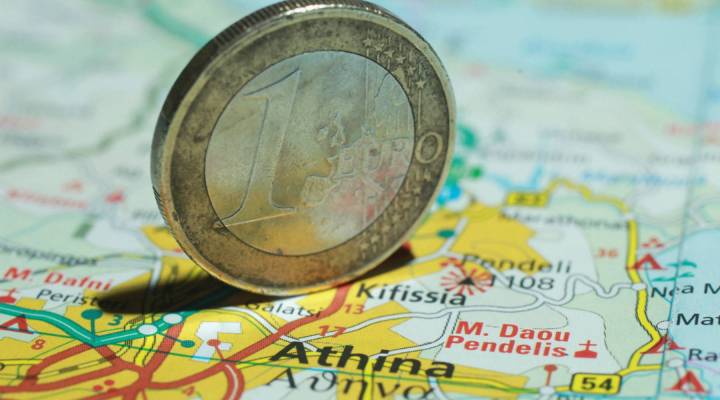 When Marketplace visited the Dioptra publishing house in Athens a year ago, Greece seemed on the brink of economic collapse.

Businesses were grinding to a halt. Dioptra’s boss, Costas Papadopoulos, was unsure whether his company would survive.

One year later, things are a bit better — but only a bit.

“We still don’t know what we’re doing or where we’re going. We feel that here in Greece, it’s a crime to be a businessman,” he said.

Greece’s left-wing government is making businesses bear the brunt of deficit reduction through higher taxes, claims Papadopoulos.  He now pays a 58 percent levy on his profits, and more tax hikes are on their way.

“Things are bad now, but they’re going to be extremely bad a year from now,” he said.

Hundreds of Greek businesses have, reportedly, shifted their headquarters to Bulgaria or Romania to escape Greece’s soaring taxes.

An online travel firm called Tripsta already has an office in the Romanian capital Bucharest, and although the owner Philipp Brinkmann says he has no plans to pull out of his Athens base, he is more likely to create any new jobs in Romania because of the “more beneficial taxation.”

That’s very bad news for Greece with its unemployment rate of 25 percent. Brinkmann claims it’s counterproductive for the Greek government to try to cut its budget deficit by mainly pushing up taxes.

“What they should do is cut public spending; make the public sector more efficient, more productive; and shed unnecessary labor,” Brinkmann said.

But the government has many supporters working in the public sector. Making businesses do the heavy lifting is, politically, an easier option.