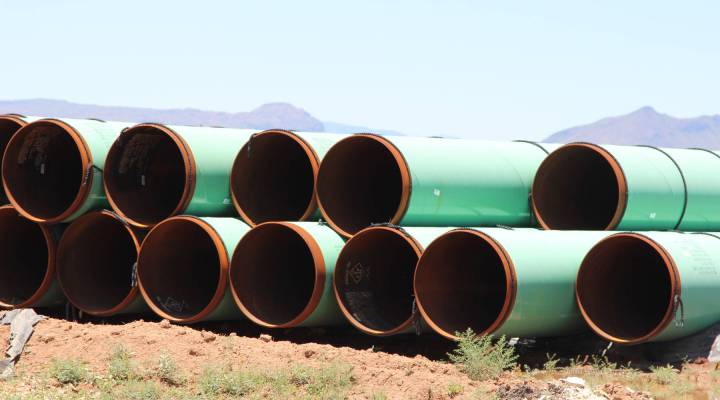 MARFA, Texas — Six landowners in west Texas have won a series of awards totaling in the millions of dollars against a company building a controversial natural gas pipeline. A seventh case was adjudicated in favor of the company. The landowners are part of a group of approximately 40 people or landholding entities that are contesting compensation offers from Trans Pecos Pipeline LLC, a subsidiary of Energy Transfer Partners of Dallas.

The pipeline has been designated by state regulators as a “common carrier,” meaning it will transport, in this case natural gas, for any natural gas producer willing to pay for the service.

With “common carrier” status comes the notion that a given project is in the public interest. With that designation comes legal power of eminent domain, the power to seize private land. Companies that exercise that power are obligated to pay compensation to affected landowners in recognition, in this instance, of the change to their lands that construction and installation of a 143-mile pipeline implies.

The Trans-Pecos Pipeline would ferry natural gas from the U.S. to the Rio Grande and into Mexico. The project comes after Mexico’s Federal Electricity Commission awarded an approximately $770 million contract to Energy Transfer Partners of Dallas to build a pipeline that starts in the oil and gas rich Permian Basin of Texas and ends in the middle of the Rio Grande where the natural gas would enter Mexican pipelines.

Mexico says it needs the natural gas for existing and planned electricity generation plants and to reduce the use of oil in the country’s existing power generation. The project has been approved by the U.S. Federal Energy Regulation Commission.

Energy Transfer Partners/Trans Pecos Pipeline LLC states that the pipeline will be designed have a capacity to transport 1.4 billion cubic feet of natural gas per day. But a review of documents that outline current electricity generation output that leverages natural gas in Mexico suggests Mexico may only need approximately 10 percent of that, at least in the near to medium term.

The pipeline will run through this field and across some of the last pristine working ranch land in the United States.

So one question being posed by some people concerns Mexico’s plans for any natural gas that it imports that is not deployed to generate electricity. Pemex, Mexico’s state-owned energy agency, may have provided part of the answer at an investor conference in London on October 29, 2014. In this document, Pemex pitches investors on the company’s intent to export liquified natural gas to Asia as part of a concept called the Transoceanic Corridor Project.

Slim is currently ranked fourth on the annual Forbes’ Billionaires Ranking. Warren is also on that list at 1,067 out of a total 1,810 billionaires identified by Forbes.

Project supporters say local governments will earn millions in property taxes paid by the pipeline company and that the state’s natural gas producers will gain access to a new market during a natural gas glut. Additionally, the small Texas town of Presidio has said previously it will attempt to use the arrival of natural gas on the border to attract industry.

It is against that backdrop that six landowners have rejected what they believe are offers that fail to adequately compensate them for the negative environmental impact that construction of a natural gas pipeline using 42-inch diameter piping will have on working ranch land. None interviewed for this story suggested the project can or will be stopped.

But they reason that does not mean they should not be fairly compensated.

Water is always a crucial consideration for landowners in rural west Texas. The planned route of the Trans-Pecos Pipeline is yards away from this well on the Barreno Ranch near Marfa, Texas.

Jeanne Simpson is one of the six. “I received this $18,000 offer and was told I had a week to accept it,” she said as we rode in her truck across the Barreno Ranch, where generations of her family have lived since the 1880s.

She said that ultimatum came after negotiations stalled with Energy Transfer Partners/Trans Pecos Pipeline LLC. She said she thought she was negotiating in good faith.

She explained that negotiations ended after she told the company that she wanted to discuss the details of that part of the pipeline route that would cut through her land before discussing compensation. She said after making that request, she received a compensation offer that she, and later a special commission appointed by a Texas judge, ruled was far too low.

“That tree is 100 years old, at least,” she said pointing to a solitary hackberry tree flanked by a boundless tableau of high desert color and jagged mountains. When the local power company put a power line across the ranch, it adjusted the route to preserve the tree.

The natural gas pipeline route cuts through this windswept slice of the borderlands, through some of the last pristine, legacy working-ranch lands in the United States.

When a local power company put a line through this ranch, it rerouted the poles to save this 100-year-old hackberry tree. The ranch’s owner is concerned the tree may be compromised when a natural gas pipeline is built through here. The pipeline route is close to the tree. For the ranch owner, the tree symbolizes endurance. The ranch has been run by one family since the 1880s.

“You’re going to have heavy trucks hauling heavy pipe back and forth,” Simpson said of a possible threat to topsoil in a region that historically has struggled with erosion and land preservation.

Simpson and five other landowners rejected the company’s compensation offers. So the company took the landowners before a special commission in early June in the west Texas town of Marfa. The commission awarded six landowners a total of about 30 times what the company had offered.

“Honestly, I don’t think it’s possible” to give fair compensation, Simpson said. “On the other hand, we have to set some sort of dollar amount and proceed from there.”

“My immediate goal is to receive fair compensation for the damage that’s going to be done to my ranch,” Simpson said.

Compensation judgements against the pipeline company come as a media campaign is launched opposing the pipeline. The campaign is backed by high-profile names in Hollywood such as Owen Wilson, Tommy Lee Jones and Wes Anderson.

In an open letter published in the Dallas Morning News, close to 100 people from celebrity to common citizen appealed to Energy Transfer to reroute the pipeline onto largely uncontested land. Since its publication, approximately 500 others have signed an online version of the letter, compiled by the Big Bend Conservation Alliance, BBCA.

This appeal is taking place as the state considers tightening eminent domain law to benefit landowners, though no formal legislation has been proposed.

In 2011, Austin attorney Bill Christian won a rare victory for landowners opposing another pipeline. But in an example of the energy industry’s power in Texas, the pipeline company was still allowed to build while its appeals went through the courts. That case will be heard by the state’s Supreme Court this fall. With respect to this case, Christian said the pipeline will be built.

“In terms of the ultimate result of having a pipeline running across their land, that’s still going to happen,” he said.

As for compensation, he suggested pipeline companies have pockets deep enough to pay for sustained legal action against resistant landowners.

“In the grand scheme of what this project is going to cost, it’s still kind of a drop in the bucket,” he said.

Back at Barreno Ranch, rain is falling and hailstones dance on a metal shed.

The downpour is welcome in a land where drought ruins lives. Jeanne Simpson said she often thinks of the generations of family who have lived here and endured nature’s challenges in a rugged, hauntingly beautiful landscape.

Orange ribbon on a west Texas ranch marks the route of the Trans-Pecos Pipeline.

“I owe their memory some courage,” said Simpson.

In a statement, Energy Transfer/Trans Pecos LLC said it will appeal the monetary judgements against it if necessary:

“We are confident in the appraised land values we have established and will be appealing the recent ruling by the Presidio Commission to district court. If necessary, we will continue our appeal to the El Paso Court of Appeals. As we have said from the beginning of this project, we use legal options, which can be expensive for all parties, only as a last resort.”

The landowners’ lawyer, Zach Brady of Lubbock, Texas, said these cases are likely to go to jury trial and that the landowners are ready. Brady said landowners in these six cases “look forward to the opportunity” to make their cases in court.