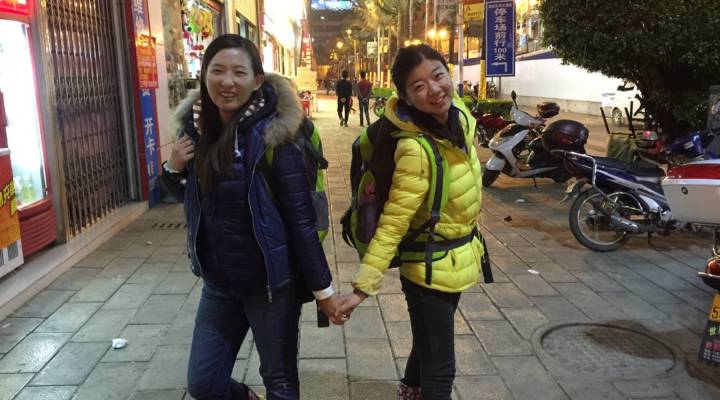 COPY
Ye Tong, left, and Lu Cheng, right, have quit their jobs among the office towers of urban China in favor of hitchhiking the backroads of the country’s far west. Rob Schmitz/Marketplace

Ye Tong, left, and Lu Cheng, right, have quit their jobs among the office towers of urban China in favor of hitchhiking the backroads of the country’s far west. Rob Schmitz/Marketplace
Listen Now

When I stopped to pick up Lu Cheng and Ye Tong along a remote mountainous road along the border of Tibet and Burma, the two friends had been hitchhiking for a couple of weeks. Thirty-six-year-old Ye Tong worked in a Japanese trading firm in one of the hundreds of office towers in the eastern city of Tianjin.

“Every morning I’d punch in, write some plans and reports, and communicate with clients,” Ye said, shaking her head. “Same thing, everyday.”

Ye had enough. She called her 25-year-old teacher friend Lu Cheng, and both of them quit their jobs, just like that, and hit the road. Lu, whose name means “journey,” said urban life in China sometimes seems meaningless.

“You’re supposed to buy a house at this age. You must marry at that age. You gotta have a car at a certain age, too,” Lu said. “Some people we’ve met in small villages out here don’t have these pressures, but they’re very happy.”

Lu said the source of this pressure is always the same.

So the two have pooled their savings for bright-colored parkas and backpacks, and they’re hitchhiking the mountains of Tibet. They’re not free from worry, though – Ye has a nasty gash on her hand from a hiking accident and she’s worried because no job means no health insurance. And Lu’s friends from home are constantly asking her over social media when she’s coming home.

The same exasperated friends, texting her from cubicles in office parks throughout China, wonder why Lu doesn’t have a plan. They’ve got plans. China has plans. Why doesn’t she? The question makes her tired, and she always has the same answer: My plan is to have no plan.