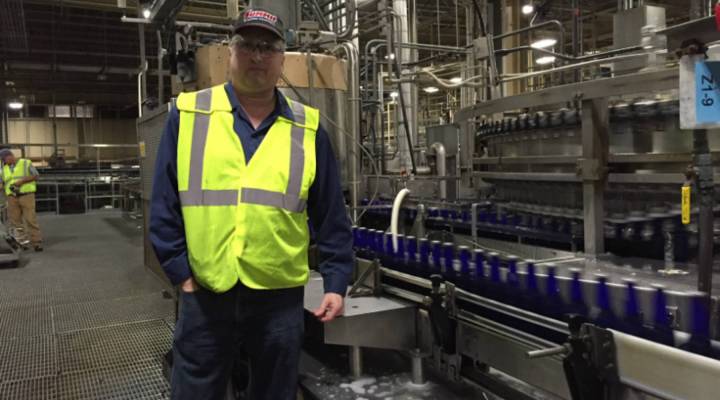 COPY
Technician Larry Slape went through an industrial maintenance program 10 years ago, and now works at the Anheuser-Busch brewery outside Atlanta to maintain the plant’s advanced machinery.”  Elly Yu

Technician Larry Slape went through an industrial maintenance program 10 years ago, and now works at the Anheuser-Busch brewery outside Atlanta to maintain the plant’s advanced machinery.”  Elly Yu
Listen Now

Factories don’t look like they used to. Today, robots and advanced technology do a lot of the work. But that doesn’t mean manufacturing jobs are going away altogether. The shift has called for a different kind of worker to maintain those robots, and they’re in high demand in states like Georgia.

Larry Slape, an electronic and instrumentation technician, keeps an eye on the machines on the manufacturing floor at the Anheuser-Busch brewery in Cartersville, Georgia to make sure they’re all working properly.

On the bottle line he oversees, dark blue bottles move by so fast on a conveyor belt it’s hard to make out their shapes. The beers are being filled at a pace of 1,300 bottles a minute.

Part of his job as a technician is to make sure the machines continue to keep working as they track things like the pH and temperature of the beers.

At his work station, he has a big red toolbox the size of a dresser, and an electric cart with a smaller set of tools so he can zip around the brewery if he needs to while on call.

“I like fixing puzzles. I like fixing things, and when I can’t fix it, it just drives me nuts,” Slape said. “It just gets on me. I have to work on it until I get it done.”

Officials in Georgia say they could use a lot more people like Slape, who work in what’s called industrial maintenance.

“Simply put, these positions are underappreciated,” said Ben Hames, deputy commissioner of the workforce division at the Georgia Department of Economic Development.

He said it can be a challenge to get people interested in these jobs because they often have outdated perceptions of the industry.

“These really aren’t the jobs of the past generations. These are jobs that require education, formal training – really require individuals to bring quite a bit to the table,” Hames said.

To help meet the demand, Georgia this year added “industrial maintenance” to a grant program for technical college students, which offers free tuition for certain students who enroll in high-demand fields.

At Chattahoochee Technical College, an instructor shows about a dozen students, like Joshua Williams, how to work on green electrical circuit boards.

Joshua Williams, a student at Chattahoochee Technical, is studying industrial maintenance. He works on an electrical circuit board in one of his classes.

Williams said he recently quit pursuing a degree in pharmacy when he found about the program.

“It fascinated me, and I get to work with my hands, which I love,” he said. He said he’s optimistic about his job prospects in the future.

“Because no matter if you have 100 percent automation, you still need to make sure all the robots are working,” he said.

The Bureau of Labor Statistics projects the field will grow much faster than the average of other jobs.

Williams said he hopes to learn enough to land a job at one of the manufacturing companies that have popped up in his town of Cartersville.