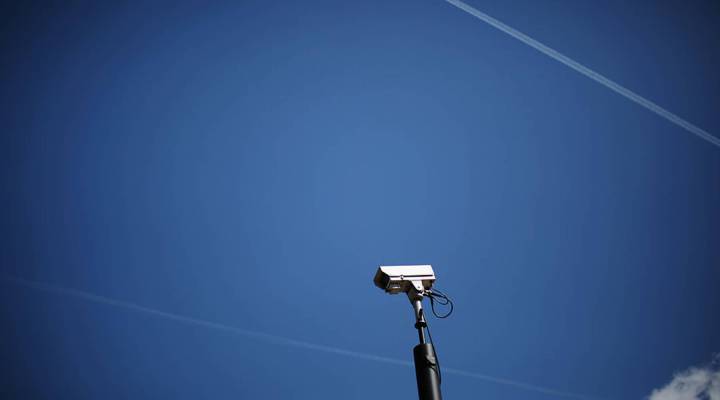 It’s time to take a peek into our shared technological future, courtesy of a guy whose track record is pretty good in that department. Kevin Kelly was the founding executive editor of Wired Magazine.

So you know, he’s been writing about technology for, well, we’re just gonna say,a good long while now. Kelly has a new book out about the way technology’s changing, and how it might change us. It’s called “The Inevitable” and it’s out now.

One of the chapters in the book is called “Tracking” and it covers the increasing level of quantified-self tracking and more ominously the idea of constant surveillance. Kelly says, more or less, there’s no going back.

“An analogy I liked to use is, a lot of people are familiar with kind of the battle we had, maybe in the last decade about copying,” he said.  “So my version is that the internet is like the world’s largest copy machine, and if anything can possibly be copied touches it, it will be copied indiscriminately, like a superconductive liquid.”

Kelly says the same thing is happening with tracking and there’s no stopping the activity.

“The internet is the world’s largest tracking machine, and anything that can be tracked, will be tracked,” he said. “So the only way to deal with it is to embrace the tracking and say how do we civilize it? How do we tame it, how do we domesticate it?”

So how do we civilize it?

“So while I think that tracking is inevitable, I think we do it by something I call coveillance,” he said. “The reason why we’re uncomfortable right now, they’re tracking us, I don’t know what they’re tracking, I have no control over it, they’re not accountable, and I get no benefit. That doesn’t feel right…But if I know who’s looking at me, who’s watching me, who’s tracking me, I have some access to it, I can correct it, I can hold them accountable, and I get some benefit,  that begins to feel a little more comfortable.”

Read an excerpt from “The Inevitable” below:

We have preconceptions about how an intelligent robot should look and act, and these can blind us to what is already happening around us. To demand that artificial intelligence be humanlike is the same flawed logic as demanding that artificial flying be birdlike, with flapping wings. Robots, too, will think different.

Consider Baxter, a revolutionary new workbot from Rethink Robotics. Designed by Rodney Brooks, the former MIT professor who invented the bestselling Roomba vacuum cleaner and its descendants, Baxter is an early example of a new class of industrial robots created to work alongside humans. Baxter does not look impressive. Sure, it’s got big strong arms and a flat-screen display like many industrial bots. And Baxter’s hands perform repetitive manual tasks, just as factory robots do. But it’s different in three significant ways.

First, it can look around and indicate where it is looking by shifting the cartoon eyes on its head. It can perceive humans working near it and avoid injuring them. And workers can see whether it sees them. Previous industrial robots couldn’t do this, which meant that working robots had to be physically segregated from humans. The typical factory robot today is imprisoned within a chain-link fence or caged in a glass case. They are simply too dangerous to be around, because they are oblivious to others. This isolation prevents such robots from working in a small shop, where isolation is not practical. Optimally, workers should be able to get materials to and from the robot or to tweak its controls by hand throughout the workday; isolation makes that difficult. Baxter, however, is aware. Using force-feedback technology to feel if it is colliding with a person or another bot, it is courteous. You can plug it into a wall socket in your garage and easily work right next to it.

Second, anyone can train Baxter. It is not as fast, strong, or precise as other industrial robots, but it is smarter. To train the bot, you simply grab its arms and guide them in the correct motions and sequence. It’s a kind of “watch me do this” routine. Baxter learns the procedure and then repeats it. Any worker is capable of this show and tell; you don’t even have to be literate. Previous workbots required highly educated engineers and crack programmers to write thousands of lines of code (and then debug them) in order to instruct the robot in the simplest change of task. The code has to be loaded in batch mode-i.e., in large, infrequent batches-because the robot cannot be reprogrammed while it is being used. Turns out the real cost of the typical industrial robot is not its hardware but its operation. Industrial robots cost $100,000-plus to purchase but can require four times that amount over a lifespan to program, train, and maintain. The costs pile up until the average lifetime bill for an industrial robot is half a million dollars or more.

The third difference, then, is that Baxter is cheap. Priced at $25,000, it’s in a different league compared with the $500,000 total bill of its predecessors. It is as if those established robots, with their batch-mode programming, are the mainframe computers of the robot world and Baxter is the first PC robot. It is likely to be dismissed as a hobbyist toy, missing key features like sub-millimeter precision. But as with the PC and unlike the ancient mainframe, the user can interact with it directly, immediately, without waiting for experts to mediate-and use it for nonserious, even frivolous things. It’s cheap enough that small-time manufacturers can afford one to package up their wares or custom paint their product or run their 3-D printing machine. Or you could staff up a factory that makes iPhones.

Baxter was invented in a century-old brick building near the Charles River in Boston. In 1895 the building was a manufacturing marvel in the very center of the new manufacturing world. It even generated its own electricity. For a hundred years the factories inside its walls changed the world around us. Now the capabilities of Baxter and the approaching cascade of superior robot workers spur inventor Brooks to speculate on how these robots will shift manufacturing in a disruption greater than the last revolution. Looking out his office window at the former industrial neighborhood, he says, “Right now we think of manufacturing as happening in China. But as manufacturing costs sink because of robots, the costs of transportation become a far greater factor than the cost of production. Nearby will be cheap. So we’ll get this network of locally franchised factories, where most things will be made within five miles of where they are needed.”

That may be true for making stuff, but a lot of remaining jobs for humans are service jobs. I ask Brooks to walk with me through a local McDonald’s and point out the jobs that his kind of robots can replace. He demurs and suggests it might be 30 years before robots will cook for us. “In a fast-food place you’re not doing the same task very long. You’re always changing things on the fly, so you need special solutions. We are not trying to sell a specific solution. We are building a general-purpose machine that other workers can set up themselves and work alongside.” And once we can cowork with robots right next to us, it’s inevitable that our tasks will bleed together, and soon our old work will become theirs-and our new work will become something we can hardly imagine.