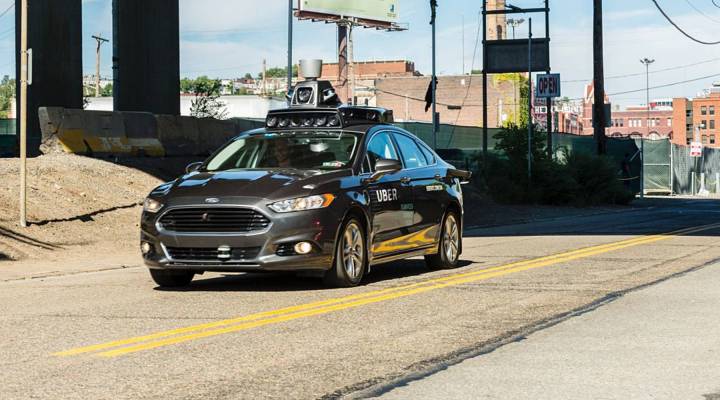 COPY
A passenger looks on as he rides in a pilot model of an Uber self-driving car in Pittsburgh. ANGELO MERENDINO/AFP/Getty Images
Robot-Proof Jobs

A passenger looks on as he rides in a pilot model of an Uber self-driving car in Pittsburgh. ANGELO MERENDINO/AFP/Getty Images
Listen Now

Earlier this month, members of the Advanced Robotics for Manufacturing Institute met for the first time in Pittsburgh.

The group, including Boeing, Wal-Mart and other big companies, plans on re-imagining American manufacturing using robotics. The effort is being bankrolled by the Department of Defense to the the tune of $80 million. The DOD’s Greg Hudas said the idea behind the Institute is to create a future where robots and people work side by side, among other things.

“We feel that the ideal thing is a collaboration between the two,” he said. Imagine, for instance, a surgeon being assisted in an operation by a robot nurse and a growing profession of skilled workers who can keep those assistants running. “This would actually generate a new workforce in this area,” Hudas said.

Pittsburgh Mayor Bill Peduto is all for the whole man-and-machine thing, but he doesn’t have the luxury of relying on ideals.

“We can’t wait and see what happens,” he said. “We have to work proactively as it’s happening to make sure that there are opportunities and benefits that are there for everyone.”

The National League of Cities estimates that within two decades, nearly half the jobs in this country could be at risk due to automation and artificial intelligence. In Pittsburgh, it feels like it’s already happening. Uber is testing self-driving cars, and dozens of companies are working on autonomous technology.

And this is just the beginning. Over the next couple years, Pittsburgh plans on improving its infrastructure to make the city even more inviting to so-called companies of the future.

With all the infrastructure investment, the city will have “the leverage to say we want it to be done in the following ways that take equality into mind,” said Laura Meixell, with the city’s Department of Innovation and Performance.

Low-skilled workers are often the first to be sidelined when technology takes over. And all this talk of Pittsburgh being the proving ground of automation is already worrying workers, for more than one reason. They have seen what happens when a city puts all its eggs in one industry basket. Years ago, when the steel industry collapsed, it took Pittsburgh’s economy with it. Good paying steel jobs gave way to service jobs.

“Service jobs that pay minimum wage, they’re not livable, and you gotta work two or three of them,” said Tom Conroy, a bus driver. “I haul those people around on the bus every day between job to job to job.”

Like his passengers, Conroy, too, has a second job — as a hairstylist. He’s retiring soon from driving a bus, but wonders what will happen to younger drivers.

“I look at them and I think, is this going to be a 25-year career for you? Or are you going to be tossed out by technology in the future?” he said.

That future may already be here. Some of those bus drivers also drive for Uber.