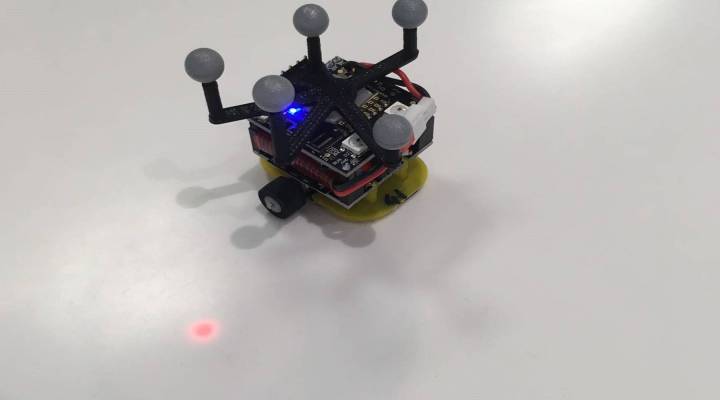 COPY
The Robotarium has about 100 ground robots that glide along a white surface. Each has a Wi-Fi chip on top and small rubber wheels on the bottom.  Tasnim Shamma/ for Marketplace

The Robotarium has about 100 ground robots that glide along a white surface. Each has a Wi-Fi chip on top and small rubber wheels on the bottom.  Tasnim Shamma/ for Marketplace
Listen Now

It can be tough to study robotics at a high level if you don’t have access to expensive equipment. But this fall, Georgia Tech researchers are hoping to change that.

The University has launched an open robotics research lab. It allows anyone around the world to remotely watch and control dozens of robots that are in Atlanta using just a computer. The idea is to help scientists collaborate on research and give students access for their studies.

In the open robotics lab called the “Robotarium,” a few dozen robots sit on what looks like a large air hockey table, with a smooth white surface. Each is about two inches tall and can fit in the palm of an adult hand. The robots all have a Wi-Fi chip on top and small rubber wheels on the bottom. Infrared cameras hanging overhead scan the robots below and can tell them apart based on how four to five reflective silver balls, attached to the top of each robot, are configured.

The robots are given specific commands to help them find their final destination. For one demonstration, the robots slowly roll off their wireless charging stations at the edges of the table and into the center to spell out the letters “G” and “T” for Georgia Tech.

Georgia Tech post-doctoral fellow, Sean Wilson, said these “swarm robots” are meant to mimic how animals like honeybees and flocking birds move and solve problems together, problems which individual animals or robots can’t solve on their own.

“Swarm robotics is the challenge of controlling a large number of robots without a central computer,” Wilson said. “So what commands do you send each individual robot so that swarm does what you want them to do?”

Georgia Tech PhD student Siddharth Mayya said the goal of the open research lab is to make robotics more accessible. “Even a high school student can just log on to robotarium.org and submit his experiment and run his code on actual robots,” Mayya said.

The lab’s founder, Georgia Tech electrical and computer engineering professor Magnus Egerstedt, said the lab will soon have more than 100 aerial drones or mini-quadcopters and 100 small ground robots, but eventually, he wants to increase that number to 1,000.

“Building and maintaining a world-class, multi-robot lab is too expensive for a large number of roboticists and budding roboticists,” Egerstedt said. “This creates a steep barrier to entry into our field.” The lab costs Georgia Tech $2.5 million, with funding from the National Science Foundation and Office of Naval Research.

Renna Brown is a former public school teacher in Pittsburgh, Pennsylvania. She visited the Robotarium recently and said she was like, “a kid in a candy shop.” Brown now works as an educational consultant and trainer promoting STEM-based activities with mostly-low income schools in Pittsburgh. She said the open-access robotics lab is a game changer for students.

“It would open up the ideology of the sky is the limit,” Brown said. “As it pertains to minorities in STEM, it gives them the opportunity to say this is really a form of technology that I can do and it is not as complicated as it is expressed to me.”

But what happens if it gets hacked?

Researchers say they’ve planned ahead by automatically programming virtual barriers around each drone to prevent collisions. The lab’s computer system also tests any code people upload for malware and viruses.