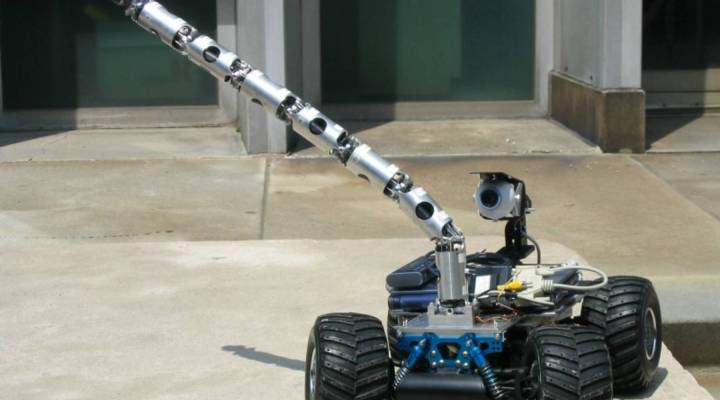 The six-legged crab-like robot in question is just a collection of anodized aluminum and servos, but kicking it still seems wrong. Nevertheless, when kicked, it yields and steps backward out of the way. This design is about safety, but it’s also about how Travers envisions the role of robots in the workplace.

“A teammate instead of a tool,” he said.

Carnegie Mellon’s Biorobotics Lab has come up with robot components that snap together into different shapes for different duties. The robots they make are customizable, but perhaps more importantly, cooperative.

“Part of my job is to create robots that are easier to use,” said robotics professor Howie Choset, also a co-director of the Biorobotics Lab. This is something robotics engineers talk about a lot. They believe deeply their innovations don’t replace humans but work with them. In fact, there’s a whole new range of research right now working to optimize this human-robot tango.

“It’s a little bit like a dance,” said Anca Dragan, artificial intelligence researcher at University of California, Berkeley. “Usually you have a leader and a follower, and sometimes you want the person to be in the lead.”

One key issue: It’s dangerous if humans think a robot is more competent than it really is. For example, imagine a robot needs to hand someone a sharp or heavy object — it could do so confidently, or more slowly.

“You’re going to read different things into it depending on the timing,” Dragan said. “We’ve found, for instance, that you can make the robot look more hesitant versus very capable, steady, competent.”

The first robot to kill a human is believed to be back in 1979, when a 1-ton robot accidentally struck a worker at a Ford plant in Flatrock, Michigan. Today, at a tech class for high school students in Adrian, Michigan, teacher Mark Ackerman is using a new robot made with safer technology.

“This is Baxter,” Ackerman said. “You can actually stand next to him and do work all day long.” No old-school protective cage needed for Baxter, which is made by Rethink Robotics. Even though it looks like a beast with broad shoulders and thick arms, it’s rigged to know when to back off and can be trained to do a variety of repetitive factory tasks.

Robots are evolving. Humans also may need to change their behavior to thrive with technology piling into the workplace. As they say, it takes two to tango.