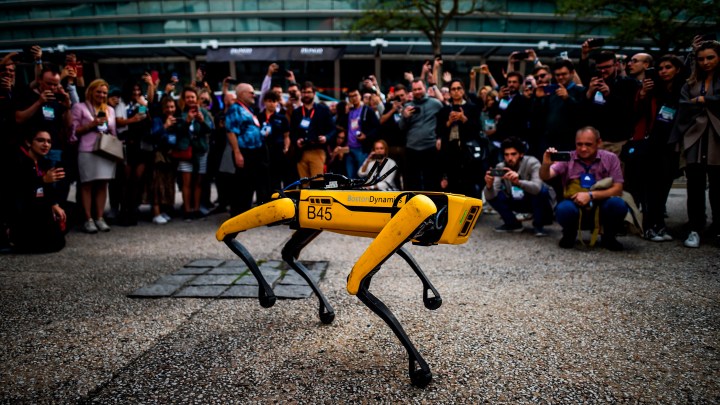 COPY
People take pictures and videos of Spot, Boston Dynamics' robot dog, during a presentation on the last day of the Web Summit in Lisbon in 2019. Patricia de Melo Moreira/AFP via Getty Images

People take pictures and videos of Spot, Boston Dynamics' robot dog, during a presentation on the last day of the Web Summit in Lisbon in 2019. Patricia de Melo Moreira/AFP via Getty Images
Listen Now

Hyundai is reportedly spending somewhere in the neighborhood of a billion dollars to buy Boston Dynamics, the company that’s best known for making those cool-but-creepy bright-yellow robot dogs that can run and dance and jump on cars and open doors.

If the deal goes through, it would be the third time in seven years that Boston Dynamics has been bought — first by Google, then SoftBank — even though it’s not profitable.

“This isn’t about profits in the short term,” said Craig Le Clair, an artificial intelligence and automation analyst at Forrester Research. “This is about what will this type of automation look like in five years?”

Making robots that are nimble and agile and can operate independently in the world is hard — harder than people thought it would be, according to Mary Cummings, a professor of electrical and computer engineering at Duke.

“Because we can’t get these robots to work in the real world under the range of conditions that we want them to work in,” she said. “I want Rosie, the robot maid from the Jetsons, but it turns out the range of uncertainty, the conditions that robots have to solve in the home and in the driving space are really, really hard.”

The real value in Boston Dynamics, a spinoff from the Massachusetts Institute of Technology, is that “they have top-level researchers who know things that other companies cannot do,” said Sangbae Kim, a mechanical engineering professor at MIT.

Any company that can really figure it out will be well-positioned to solve some of the big challenges of the future.

“Physical robotics is an area that really hasn’t seen its day yet,” Le Clair said. “Once the technology hits a tipping point, in terms of the ability to navigate the landscape, and how to work with a human in the loop, I think that’s the big opportunity here.”