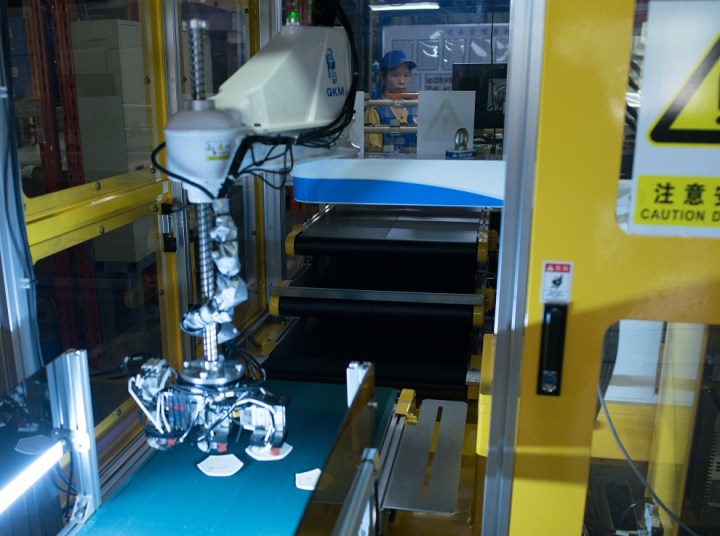 COPY
A worker looks on as a robotic arm at the Shuoke factory sorts plastic panels to form a soccer ball. Machines like this have helped the firm cope with rising costs. (Shanghai 808 Studio) Shanghai 808 Studio

A worker looks on as a robotic arm at the Shuoke factory sorts plastic panels to form a soccer ball. Machines like this have helped the firm cope with rising costs. (Shanghai 808 Studio) Shanghai 808 Studio
Listen Now

At the Shuoke sports equipment factory in southern China’s Dongguan city, workers at the end of an assembly line box finished sports water bottles for shipment.

It’s rare for workers to touch the products; much of the manufacturing process at the factory has been automated.

The machines have allowed the factory to triple its production to 12,000 sports water bottles a day with just four workers where there would have been 13.

As the U.S.-China tariff war continues, automation is one of the ways Chinese manufacturers are keeping costs down.

Shuoke produces water bottles and soccer balls, both of which are subject to additional tariffs of 10% and 25% in the U.S.

Many factories have already been automating operations to counter rising costs in raw materials and labor.

Some manufacturers have replaced 30% to 40% of their workers with machines, according to a 2018 joint study by China Development Research Foundation and venture capital fund Sequoia Capital.

However, Shuoke’s Du said automation is a way for the firm to ramp up production without having to hire many more staff. The factory has doubled its workers to 60 since it began automating production lines in 2015.

Manufacturers also complain that there is a massive labor shortage, which is partly fueled by a decades-long government policy that restricts each couple to no more than two children.

Official statistics show China’s workforce peaked at 941 million in 2011 and has been on the decline since.

Population expert Yao Meixiong previously told Marketplace that the working age population between 2012 and 2017 decreased by 25 million, equivalent to the entire population of Australia disappearing from the work force. As a result, wages have gone up.

“We increase our workers’ salaries 8% to 10% each year,” said Shuoke’s marketing director Du.

Other manufacturers in the area report even bigger wage increases.

Then there are those who moved out of China to cheaper countries in Southeast Asia. U.S tariffs, which have been imposed on nearly two-thirds of Chinese goods so far, have sped up the exodus.

Shuoke has no plans to move yet. Even though nearly a third of its water bottles are headed to the U.S. market, that may not be the case for much longer.

“We are now trying to sell more to China to reduce our reliance on the US,” Du said.

For now, the final stages of soccer balls still need to be assembled by hand at Shuoke, by workers like Deng Lijuan.

“It’s good here, not like other factories that have long hours. Even if I must do overtime at this factory, I only have to work until 9 p.m.” Deng said. “I get most weekends off so I can take my son out to play.”

Her chief concern, she says, is not about losing her job to machines, but about getting a regular paycheck.

Deng’s supervisor, Ding Ling, agrees. She said she had previously worked at factories that paid her two months late and gave her bug-infested food — things that don’t happen at Shuoke. Even so, Ding Ling doesn’t plan to stay at Shuoke too long.

“I’d like to eventually start my own business, when my children are older,” Ding said.

If the factory does manage to fully automate its production lines, Shuoke would still need employees with the right skills.

“But in China, the workers who have the qualifications often do not want to work in manufacturing,” he said.