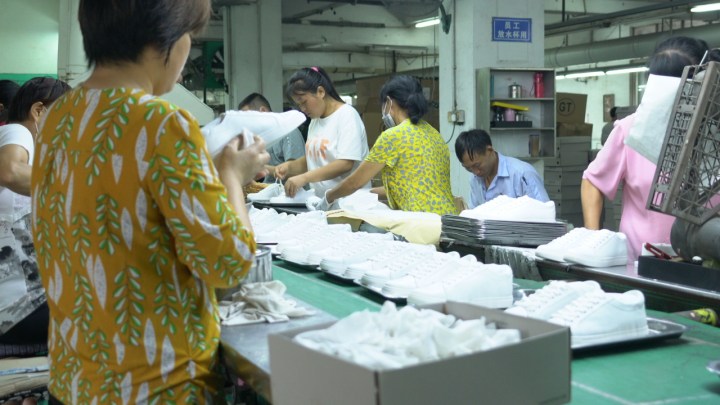 COPY
Workers at a shoe factory in Southern China. Most of them come from the poor countryside to give their families a better life. Shanghai 808 Studio

Workers at a shoe factory in Southern China. Most of them come from the poor countryside to give their families a better life. Shanghai 808 Studio
Listen Now

Factory worker Li Xiangjun has salt-and-pepper hair and wears a worried expression when he poses for a photograph. When visited by “Marketplace” in Southern China’s Zhongshan city, the 54-year-old was on medical leave.

“A few days ago, I fainted and collapsed,” Li said.

He attributes it to night shifts and a lack of sleep during the daytime. Li works at a factory manufacturing screws for golf clubs sold to the U.S. The schedules there are grueling compared to his previous employment at the United Shoe factory, which manufactures boots for brands like Minnesota-based Red Wing Shoes.

However, he was laid off from the shoe factory in December 2018 when it relocated to Cambodia in Southeast Asia.

“I heard the company is offering a salary of 800 yuan ($110) a month in Cambodia, whereas our salaries were five times more,” Li said.

According to President Donald Trump, Li’s job loss is among the three million manufacturing jobs that disappeared in China because of U.S. tariffs imposed on hundreds of billions of dollars of Chinese exports.

The U.S. has last week reached what’s being called a “phase one” trade deal with China. The Trump administration says it has agreed to scrap planned tariffs on $160 billion of Chinese goods and to cut the tariff rate on another $120 billion of goods in half.

Trump said that China needs a trade deal with the U.S. more than the other way around.

According to China’s National Bureau of Statistics, 3.8 million manufacturing jobs were lost in urban areas last year. As a share of overall urban employment, it was the biggest annual drop in five years, at 1.5%.

However, employment in factories has been declining every year since 2015, long before the U.S.-China trade tensions started.

Chinese official data also shows the share of manufacturing declined from 22.7% to 17.3% out of overall urban employment between 2014 and 2018.

Part of that may be the result of automation and manufacturers leaving China.

Former United Shoe worker Li said he was not shocked that he was out of a job last year.

“We heard from factory managers that our company wanted to move out of China, starting a few years ago,” he said. United Shoe did not respond to repeated requests for interview.

Manufacturers have cited rising costs for labor, raw materials, rent and stricter environmental checks from the government as top reasons for wanting to leave China. The U.S. tariffs may speed up their exit plan to low-cost countries in Southeast Asia.

“The factories that remained in China, tended, although not exclusively, to be more of the high-end, value-added factories,” said Geoffrey Crothall with the Hong Kong advocacy group China Labour Bulletin.

These higher paying jobs are not available to workers like Li Guilian (no relation to Li Xiangjun). She dropped out of school after the second grade and was also laid off by the United Shoe factory.

“I received some compensation from the factory and also a bit of government money,” Ms Li said.

That money is not enough for her to stop working even though she is past 50, which is the official retirement age for women employed in the private sector.

China has a pension system, but for years employers could get away without contributing for their workers. The rules were strengthened in 2008 but it was too late for Ms Li.

United Shoe has not contributed enough for her to receive a pension, even after working for the company for 18 years.

Even with a social security insurance system, workers need to save a lot. Mr Li Xiangjun’s fainting spell landed him in the hospital for a few days.

“The health insurance covered some of the costs, but I was too scared to stay longer and checked out early. I still had to pay 3000 yuan [$430],” he said.

He considers himself lucky to have found another job.

China’s statistics show there are still 72 million people in urban areas working in the manufacturing industry, most of whom are from the poor countryside trying to give their families a better life.

Factory work has allowed Mr Li to build a new family home, put his children through college and support his elderly parents.

“My wife and I have also helped our two sons pay for their weddings and put down payments on their first homes,” Li said.

But at what cost?

Both Mr Li and his wife, Zhang Yonghong, traveled 700 miles from their village in central Hubei province in the 1990s to work in factories, leaving their children, when they were just a few years old, behind.

“Being apart from my children for two decades, our relationship has suffered, even though I called and wrote letters to them regularly,” Zhang said.

The factory’s closure was just business, he said.