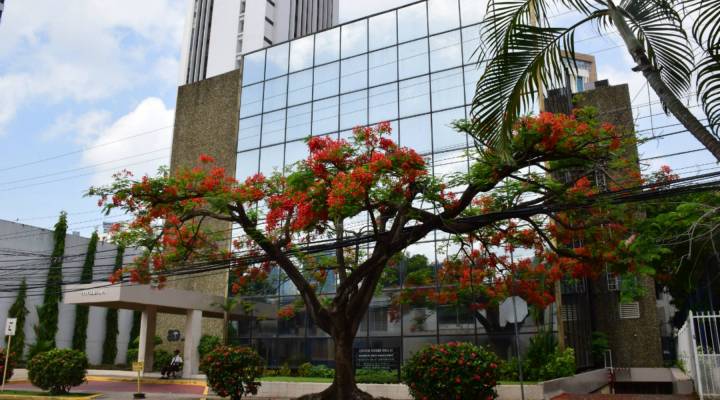 A guard sits outside the headquarters of Mossack Fonseca in Panama City. Justin Ho/Marketplace
Listen Now

Panama has just opened a new, wider canal, but less cause for celebration is another feature of the Panama brand: its reputation as a go-to spot for hiding money.

The “Panama Papers” burst into the open with the news in April that a still-unidentified person leaked to the media more than 11 million documents from Mossack Fonseca, a law firm headquartered in Panama. The documents detail the secret dealings and offshore accounts of clients the world over. Panama, it seems, had become a kind of Switzerland — the place you think of to hide money from tax authorities, legal opponents and former spouses.

“Panama has been battling this perception for some time now,” said Ivan Zarak, Panama’s vice minister of the economy. “We’ve made great advancements regarding transparency.”

Zarak doesn’t think Panama is a magnet for dirty money, and actually challenged Marketplace to open an account while reporting in the country.

Marketplace didn’t take up Zarak’s challenge but did note that if any bank were to be strict, it’s likely to be the one beneath the office of Ministry of the Economy.

Zarak said Panama signed onto the Foreign Account Tax Compliance Act , the 2010 U.S. law that pushes countries to share Americans’ tax information with U.S. authorities. He emphasized that Panama has now been removed from the Financial Action Task Force’s grey list of suspected tax havens. That happened this winter, several months before the Panama Papers leak. And after the attention this year, Panama belatedly agreed to new standards from the Organisation for Economic Co-operation and Development for exchanging financial information. But the headlines still refer to the scandal as the “Panama Papers.”

“You want me to get started on that? I completely reject that moniker,” Zarak said. “This was an investigation carried out by one single company. Second, 75 percent of the companies mentioned in the Panama Papers are not Panamanian companies.”

Someone else who’s not loving the “Panama Papers” sobriquet is Carlos Barsallo, an attorney, former securities regulator in Panama and a newspaper columnist. He says opaque systems to hide money are a huge problem, but not just Panama’s problem.

A cat nap in the historical Casco Viejo neighborhood of Panama City.

“In one case, the IMF did a survey and found that more than 42 jurisdictions offer these types of services,” Barsallo said. “If we are intelligent, [these revelations] will be useful. If we are not, it’s going to be a sad story. He said Panama’s government has promised it really is serious about cracking down.

“But that’s not enough. We have to produce results, concrete results,” Barsallo said.

“We knew that some of this was going on, but we didn’t know that somebody was out there selling Panama corporations and other types of corporations as if they were hamburgers,” said Roberto Eisenmann, founder of the newspaper La Prensa. “Having franchisees all over the world, doing this business with absolutely no control — it was scandalous for us.”

Eisenmann believes the current government of President Juan Carlos Varela has made important strides toward greater transparency, but he wishes it would be articulated as part of a more sweeping vision. And he’s not too keen on the “Panama Papers” label either.

Earlier this month, a Mossack Fonseca employee working in the firm’s information technology department was arrested on suspicion of illegally removing data. It’s not clear if this is related to the 11.5 million leaked documents. The employee worked not in Panama City but in Geneva, Switzerland, quite a distance from Panama.