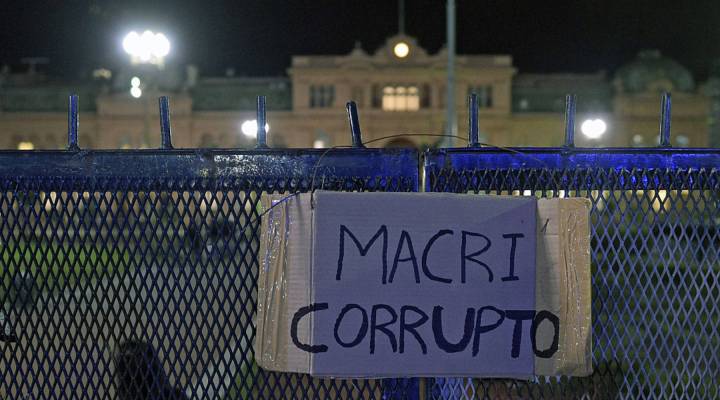 COPY
A sign reading “Macri corrupto” pasted on the fence of the Government Palace in Buenos Aires during a demonstration against Argentine President Mauricio Macri in 2016, after a prosecutor opened an investigation on his offshore financial dealings leaked in the Panama Papers. Juan Mabromata/AFP/Getty Images

A sign reading “Macri corrupto” pasted on the fence of the Government Palace in Buenos Aires during a demonstration against Argentine President Mauricio Macri in 2016, after a prosecutor opened an investigation on his offshore financial dealings leaked in the Panama Papers. Juan Mabromata/AFP/Getty Images
Listen Now

Thanks to a series of data links, we’ve gotten a pretty good look at how the world’s wealthiest are able to manage their money and shield it from the rest of the world. With last year’s Panama Papers, and more recently the Paradise Papers, the curtain has been lifted from the networks of banks, law firms and shell companies that move trillions of dollars around the world.

Jake Bernstein was a senior reporter for the International Consortium of Investigative Journalists when they first reported on the Panama Papers. In his book, “Secrecy World: Inside the Panama Papers Investigation of Illicit Money Networks and the Global Elite,” he tells the story of this reporting, and of the complex web it revealed.

Marketplace host Kai Ryssdal spoke to Bernstein about his reporting. An edited transcript of their conversation follows.

Kai Ryssdal: I know it’s only been a couple of years, but would you remind us what the Panama Papers were?

Jake Bernstein: Absolutely. The Panama Papers was a massive leak, more than 11.5 million documents coming from a Panamanian law firm called Mossack Fonseca. And the leak showed all kinds of extraordinary things. There were a number of political leaders, including the prime minister of Iceland. There were lots of very wealthy people and really 40 years of information on how the offshore world works.

Ryssdal: And you, as a senior reporter at ICIJ, had the time and the resources to dig into these things. First of all, were you surprised at the scale of the — I don’t want to say malfeasance, I don’t want to say wrongdoing — but of the enterprises, I guess, that were engaged.

Bernstein: I was. I mean, everybody kind of knows that there’s this secret world, and this underground river of money. But no one really gets to see it. So we don’t know how it functions or really, you know, how it works and who it involves. And so, to really see that, to be able to see who’s involved and how it touches everything, you know, from property in New York to political leaders in Pakistan, was truly extraordinary.

Ryssdal: You know, it’s interesting you said nobody gets to see how it functions. It turns out, it functions really, really well.

Bernstein: Exceptionally well. I mean, there’s trillions of dollars that go through this thing every year. It’s extraordinary.

Ryssdal: What, then, is the takeaway from the Panama Papers? Also, more recently, the Paradise Papers? A different law firm, a different clientele, if you will, but sort of the same subterranean river of money. It’s there. We all know it’s there. And yet it continues.

Bernstein: I mean, the takeaway, I think, is the desperate need for more transparency. You know, we have to have a better sense of what’s going on in these tax havens, secret bank accounts. There needs to be more information exchanges between different governments. What the Paradise Papers, the latest leak, really showed is that a lot of this behavior is completely legal. Nonetheless, it is very detrimental to society.

Ryssdal: We have to say here, though, that President Obama, when the Panama Papers came out, I don’t know that he promised, but he certainly said he would crack down on offshoring. And he didn’t do any of that.

Bernstein: He didn’t do much, that’s for sure. The U.S. Treasury Department sat on a rule affecting anonymous bank accounts. They sat on that for several years, and what they came out with at the end of the day was this very watered-down rule. And the reason is, is that there’s a huge number of vested interests that don’t want the status quo changed. You know, these are lawyers, these are secretaries of state. These are people who are benefiting from this system.

Ryssdal: And also, and this is going to get me some some letters, e-mails and mean tweets, there are arguably more pressing priorities, governmentally.

Bernstein: I mean, pick your priority. This one touches everything. They say that as much as $70 billion a year in tax revenue is shifted from corporate profits to tax havens in the United States every year. So that’s a lot of money that could go for health care, go for infrastructure. This, in some ways, does really touch everything.